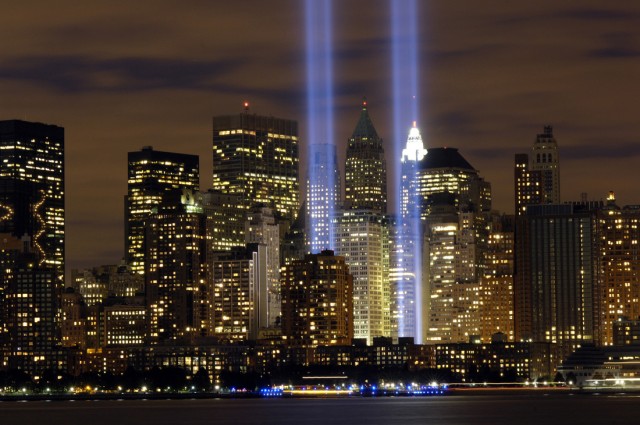 This display, known as Tribute in Light®, appears as twin shafts filling the void of where the World Trade Center twin towers previously stood in lower Manhattan. The memorial plaza will be open on Sept. 11 to the general public for the first time since the attacks, from 6:00 p.m. to midnight, for anyone who wants a closer look at this feat of illumination. Tribute in Light® has become known throughout the world as an example of the healing power of art as people remember and revisit the 9/11 Memorial.

After 9/11, several individuals came up with the idea of two beams of light rising above the skyline of New York. These artists, lighting designers and architects collaborated as part of the effort to promote unity during the massive rescue and recovery that was underway. The team received a grant from the Lower Manhattan Development Corporation and additional assistance by Con Edison, New York’s utility company. Six months after 9/11, the lighting tribute was presented for the first time on March 11, 2002. It was produced by the Municipal Art Society of New York (MAS), founded in 1893 to preserve landmarks and public spaces, and Creative Time, an organization that commissions public art.

Tribute in Light® was so well-received at its first showing that it has been presented every year on 9/11. It is made up of 88 xenon light bulbs, each 7,000 watts. The bulbs are arranged in two squares, each 48 feet, to resemble the shape and location of the Twin Towers of the World Trade Center. The display is put together on a nearby roof and is the strongest beam of light projected from the earth. On a clear night, the beams are visible within a radius of 60 miles and can be seen up to four miles in the sky.

Migrating birds were becoming confused by the bright lights in 2004 and in 2010. In order for them to escape, the lights had to be switched off for 20-minute intervals. The danger is that birds can use up a lot of their energy trying to fly around the bright lights. New York is not normally in the migratory path so this does not happen every year. The New York City Audubon Society works with MAS when the light display coincides with the birds’ path.

The creators of this tribute worked together to uplift, remember, inspire and unite others during the most horrific attack on American soil. The design by architects John Bennett, Gustavo Bonevardi and Richard Nash Gould, artists Paul Myoda and Julian LaVerdiere, and lighting designer Paul Marantz has become a poignant and memorable display of light gracing the New York skyline. Tribute in Light® contributed to the healing process and showed that art has a valid place within the 9/11 Memorial. In addition to viewing the lights at the memorial plaza, the MAS has named several public viewing locations in Manhattan, Brooklyn, Queens, Roosevelt Island and New Jersey. For more information about public viewing, click on the link below.