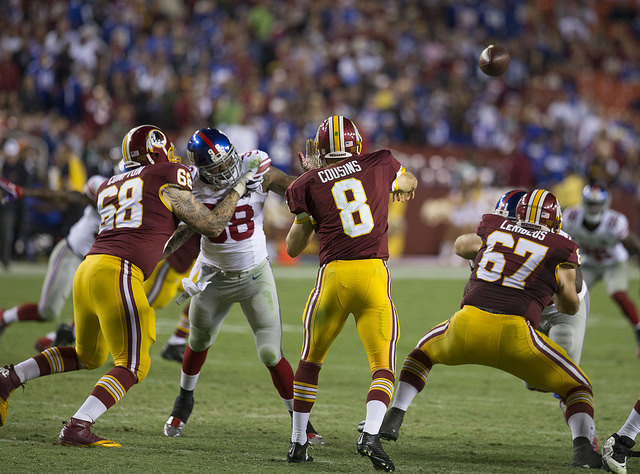 Sitting at 1-3 with a quarter of the 2014 NFL season done, the Washington Redskins face many challenges. A number of commentators thought that Kirk Cousins could be the long-term answer at quarterback when Robert Griffin III went down early in the second game of the season. Cousins outplayed RGIII in the pre-season and did well as his replacement in the game against the Jacksonville Jaguars and in the next matchup against the Philadelphia Eagles. Much of the optimism evaporated in the four interception 45-14 blowout loss to the division rival New York Giants. Cousins looked overwhelmed and overmatched, particularly in the second half as he tried to engineer a comeback.

Many NFL quarterbacks perform well when the ground game is flourishing and the pass protection holds up to allow sufficient time to survey the field. The best of the best manage to perform even when chaos takes hold. Perhaps Cousins revealed that he cannot reach the rarified air of the NFL quarterback elite, but he needs to at least perform at a functional level in which his decision-making is not suspect. The west coast offense favored by Jay Gruden relies on quick reads and releasing the ball sooner rather than later. Although the Redskins coach has a myriad of challenges to address in preparation for the Monday night game against the Seattle Seahawks, the Redskins offense needs to allow Cousins to react quickly to what the Seahawks show him. If not, Fedex Field fans will be in for another long night,

Almost lost in Cousins’ mistake prone outing against the Giants was the inability of the Washington defense to slow down Eli Manning and the reinvigorated Giants’ attack. After suffering through his own mistake filled 2013 season, Manning pulled out all the stops against the Redskins. The Skins secondary, which was missing cornerback DeAngelo Hall to a season ending Achilles injury, was exposed once again as a problem area for the defense. When the Washington defense fails to put pressure on the opposing quarterback, the secondary is unable to cover receivers for long. Even using five defensive backs for most of the second half did not help the secondary much.

If the offensive line can block well enough to give Alfred Morris some room to run, the Redskins can fix some of the problems by churning more of the clock. A stronger running game could also give Cousins some relief and cause defenses to pay more attention to run fakes in play action passes. Allowing defenses to tee off on Cousins in a primary air attack is not a workable combination. A renewed running game is really the only hope for fixing the many challenges facing the Washington Redskins.

The Skins are lucky they will face the Seahawks at Fedex Field. The Seahawks are virtually unbeatable at home. Nevertheless, facing Richard Sherman and the Seahawks defense is a tough way to put a shaken quarterback back on track. Jay Gruden will need to make sure that he asks for only what Cousins can deliver. If Cousins is only a “game manager,” then Gruden needs to limit the attack to what is possible. The many challenges facing the Washington Redskins require careful coaching instead of a gunslinger approach.