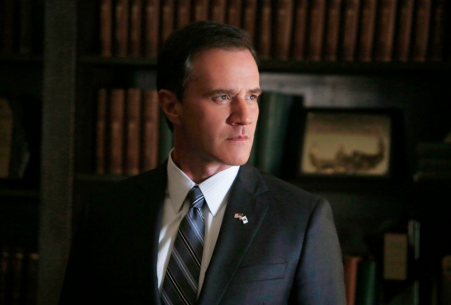 The underlying themes in Agents of S.H.I.E.L.D. this week deal with the traitorous Ward and matters of family. Ward’s, Skye’s, SHIELD’s and Hunter’s former family member via marriage, Agent Morse aka the Hellbeast. The show opens with an attack on the United Nations with Whitehall’s HYDRA agents masquerading as SHIELD they kill a number of delegates and injure General Talbot. Amazingly, Talbot defends Coulson’s group against Christian Ward, the senator brother of Grant, and before the end of the episode, it appears that the general is a firm supporter of the spy organization.

After the imposter attack on the U.N. Coulson sends Skye to get more information from Ward about his brother and May, Bobbi and Hunter to Okinawa to gather information and to intercept any further HYDRA attacks. While Lance and Melinda May are observing Bobbie interacting with the HYDRA agent, they learn that her cover has been blown and the two step in to save her life. It turns out that Hunter and Bobbi still have feelings for each other and May gets the comic line of the week just prior to saving Bobbie’s life, “You do know I don’t like you, right?” This said to Hunter right in the middle of the long running list of complaints about his ex.

The Agents of S.H.I.E.L.D. this week is all about family matters. Whether dealing with the remnants of the relationship between Lance and Bobbi or the “Fitzsimmons” fractured relationship or the reality behind Grant and Christian Ward’s sibling interactions. Later, when more SHIELD agents are killed by HYDRA Coulson feels like his family of spies is dwindling.

Simmons and Fitz have a set to about Leo’s problems and Jemma’s leaving. It turns out that apart from Fitz’s make believe Simmons, the real one doesn’t help him but upsets him. Leo believes that Jemma left because he is different and cannot accept the “new” him. Rather than go into it with her former lab partner, Simmons leaves in tears. Coulson drops in to pay Christian Ward a visit and Phil gets the second best comic line of the week with his “I assume these are for your speech, I made a few changes…it’s funnier now.” Although his, “Don’t worry, I haven’t been waiting long,” line to Ward came very close to being at least as funny as the speech line.

It is revealed that Senator Ward wants custody of his brother and until the two men hammer out an agreement, Christian Ward comes across as highly unpleasant until Phil reveals to the senator that he, “has your brother in my basement.” Skye visits Ward while Coulson speaks with the traitorous agent’s sibling who still believes he has the upper hand where she is concerned. Later Phil explains to the “traitorous son-of-a-b*tch” that Grant is more like his brother than he thinks.

Coulson learns too late that his agents in the field are in danger and he almost loses Melinda May, Hunter and Bobbi. Agents of S.H.I.E.L.D. garners at least one supporter from General Talbot who has apparently finally seen the light and loses one Grant Ward who escapes custody on his way to brother Christian’s facility and pending trial. The underlying theme of family matters showed just how deeply the idea of family fits in the SHIELD verse. Apart from all things familial, May gets a chance to kick butt again, Lance and Bobbi look like they may be considering a reconcilement and Simmons thanks Mack for being a friend. One question remains unanswered, however. When Agent Walters is dying from Toshi’s weapon, she manages to get out a puzzling statement before crumbling to ash, “HYDRA would never do th…” Do what? The implication is that they would never “do this.” If that is true, how would Walters know and if it is not HYDRA, who is it? Skye’s dad?