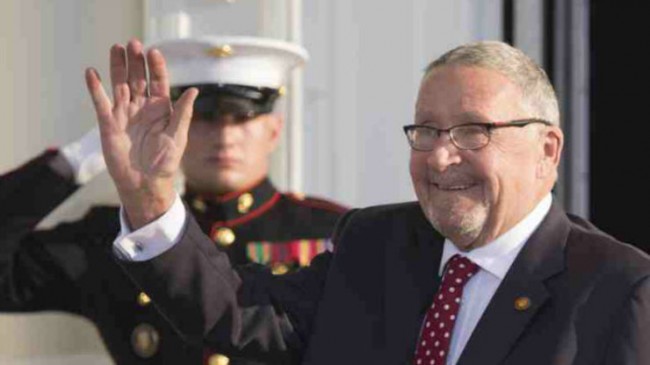 Following President Sata’s death of Zambia, an interim leader has been appointed. The new ruler, who is set to be head of state for about 90 days, until the new election, is the first white man in the place of the president in Africa since F.W. de Clerk ruled in South Africa from 1989 to 1994. Zambian Vice President, Guy Scott, is now the new interim leader and is set to take the reigns until another president can be chosen.

President Sata, nicknamed “King Cobra” for his supposed sharp tongue, was a man on a mission to improve the state of the country, but his mission will have to be continued by his successor, now. President Michael Sata died on Tuesday in London after receiving care at a hospital there for an unknown illness. Though much information was not released on his condition, his people are apparently sad at his passing. However, the show must go on, as Zambia can not be without a leader. President Sata was praised for the actions that he took while in charge, by his people, but at the same time he was slammed by political figures who stated that his behavior at home and abroad was not impressive. They were increasingly angry that he supposedly submitted a new draft for the Zambia constitution, in which he seemed to be wanting some changes. Sata, who was elected in 2011, was working on improving the nation’s infrastructure, as he used an ‘increasingly abrasive’ style to get things done. Though political figures were not exactly pleased, he was well liked by his people and will surely be missed.

According to sources, Guy Scott has been well liked as Vice President of Zambia. He was also appointed into the position in 2011 and at the age of 70, he knows much about the country, as he comes from a lineage where working to make the country better was a daily task. Scott’s father was apparently politically active in Zambia for a long time. He ran two newspapers and was an ally to many Zambia Nationalists. He was also part of parliament while Zambia was still tied to Britain.

Though Vice President Guy Scott was born in the area it was not officially Zambia when he was born. Still under British rule, the country was known as Northern Rhodesia, in which Scott was born in an area called Livingston. After they left British rule is when it became Zambia. This is what poses the biggest problem for new interim leader, Scott, because since his parents were not born in the country, the constitution prevents him from being able to be president. This is one of the things that was rewritten in the new draft of the constitution, though it has not yet been accepted.

According to sources, many were actually expecting Defence and Justice Minister Edgar Lungu to be appointed as interim leader. The election for the new president is suppose to take place within 90 days. It is not yet clear exactly who will be running but as it stands now, Guy Scott will not be able to do so, in accordance with law. Though his new position as “fill in” head of state during these 90 days will definitely put his name in the history books. He is expected to rule until the election is over and a new president is appointed. As the first white head of state in many years, Scott has got his work cut out for him.