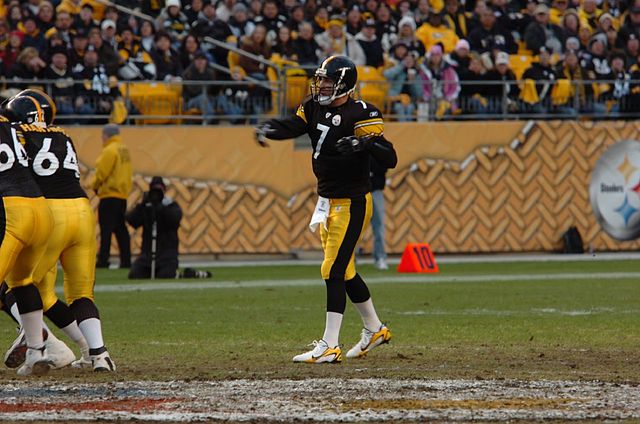 In an game highlighted by a first half offensive explosion and a second-half comeback effort, Ben Roethlisberger and the Pittsburgh Steelers crushed the Indianapolis Colts at Heinz Field 51-34 Sunday. Pittsburgh got out to a huge lead in the first half as Roethlisberger lit up the Colts defense for over 500 yards. Indianapolis tried, without success, to stage a comeback as the Steelers held onto their lead in a relatively low-scoring second half.

Indianapolis came into this match-up as one of the hottest teams in the NFL, winning 5 straight after a 0-2 start to the season. Pittsburgh got a big win over the Texans in week 7 on Monday Night to improve to 4-3 but had failed to win consecutive games.

To start the game the Colts got the ball and opened up with a big pass play to Ty Hilton to set up an early field goal and go ahead 3-0. After that opening score, the game started to go all the Steelers’ way with their first four drives ending in touchdowns. Pittsburgh’s offense did a great job early; keeping their play calling very balanced between the run and the pass. LeVeon Bell continued to be the force that he has been this season with a lot of great early rushes and short receptions. The first touchdown came on a short pass to Markus Wheaton capping off a very well-balanced first drive.

The Colts offense had a hard time in the early stages, with the Steelers getting a much better pass rush than they have up until this point in the season. After Indianapolis could not get anything going, Pittsburgh scored again with some good short passing and the touchdown going to rookie Martavis Bryant. Bryant has really impressed as of late and he would not be done in this match-up. The problems for the Colts offense continued to mount as Andrew Luck misread the defense and threw and pick six on the very next drive. The Steelers have had trouble turning teams over so this defensive score was much-needed and gave them an early 21-3 lead.

Finally, after the interception, Indianapolis started to move the ball on offense with some good passing, as this game became an aerial duel. Dwayne Allen caught their first touchdown on a very nice pass from Luck and cut the lead to 21-10. Pittsburgh was able to respond with another great passing play – this time to Antonio Brown, who made an incredible one-handed touchdown catch to push the lead to 28-10.

A first quarter injury to the best Colts corner, Vontae Davis, definitely gave the Steelers an advantage in the passing game. They were able to get another passing touchdown to Brown but this time in a classic Big Ben play that saw him avoid a sack, get outside the pocket and find Brown deep down the field for a 47 yard score. After this score, the Colts were finally able to get something going on offense with a big play to a wide open Hilton, cutting the Pittsburgh lead to 35-17.

Just before the end of the half, the Steelers had a weird moment when they looked as though they were going to go for a fourth and short but, instead, Big Ben had a pooch punt blocked giving the Colts good field position to work with. Indianapolis was able to get a field goal to cut the lead to 35-20 at half.

The second half started much like the first, with the Steelers building a long sustained drive to get another passing score. The rookie receiver Bryant got his second touchdown of the day, set up by a big pass to Heath Miller right down the middle. After this score, the Colts made their only real push towards a comeback with some good drives and a costly Darius Heyward-Bey fumble. Suddenly the score was 42-34. Another huge fumble from LaGarette Blount on the Colts’ 5-yard line gave Indianapolis a chance to get back in the game only one score down.

With a Colts’ comeback effort looming, the Steelers defense finally got a big stop when they needed it most, and not just a stop, but a safety: Luck dropped back to pass on his own 5-yard line and tripped and fell back into the end zone. He tried to throw it from his butt but was ruled down in the end zone, making the score 44-34.

The Steelers were finally able to put the game out of reach on the ensuing drive, but not without some drama. They drove inside the Indianapolis 10-yard line, were forced into a fourth and inches situation and went for it. The play call was a risky one as they drew up a play action pass to Heath Miller when a run would have been the safe and easy call. The final of 51-34 reflected a huge offensive battle and some record-breaking efforts from Pittsburgh’s offense.

Pittsburgh offensive coordinator Todd Haley has gotten a lot of criticism from fans and pundits alike since taking the Steelers job, but, against the Colts, he called a near perfect game. That perfect game led to a huge record-breaking day for Ben Roethlisberger, who ended the day going 40-49 in passing for 522 yards and 6 touchdowns. He became the only quarterback in NFL history to throw for 500 yards twice in his career and had never had a six-touchdown game before this match-up. Andrew Luck also had a big statistical game with 400 yards and three touchdowns but it was overshadowed by turnovers and the incredible day from Roethlisberger.

On the back of Ben Roethlisberger and an offensive explosion, the Pittsburgh Steelers got a big win over the Indianapolis Colts. For Pittsburgh, it means their first back-to-back win of the season after defeating the Texans the week before – improving them to 5-3 with a huge divisional game coming up next against the Ravens. The Colts were very hot coming in, with 5 straight wins, but this loss drops them to 5-3 and raises some major questions about their defense.