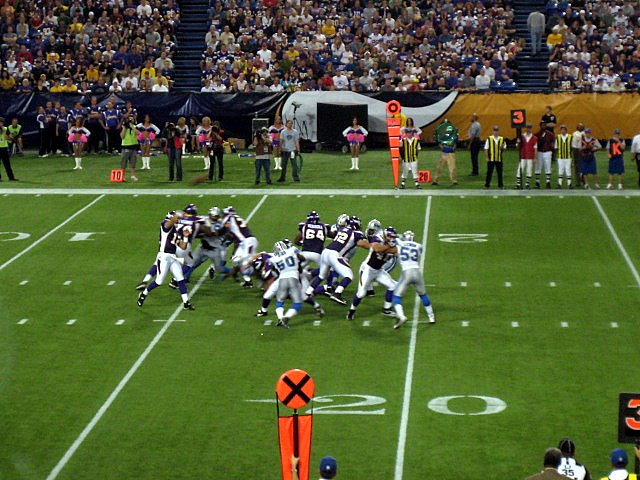 Detroit Lions are still failing to overcome problems concerning the offensive side of the ball, and it does not appear this issue wil be resolved any time soon. The Lions currently claim the top spot in the NFC North with a 4-2 record and the team’s defensive side of the ball recently smashed the Minnesota Vikings with a 17-3 win. However, they were held to scoring under 20 points for the fourth time this season, and have only converted two of their last 24 third downs.

The Detroit Lions faced the Minnesota Vikings without their number one receiver Calvin Johnson, who is out with a high ankle sprain, and running back Reggie Bush, who also is out with an ankle injury. Their first line drive looked promising enough as they opened with a seven-play, 80-yard drive that resulted in a 9-yard touchdown pass to running back Theo Riddick. The Detroit Lions were forced to punt on five of their next six possessions with only a 60-yard gain. Coach Jim Caldwell admitted to the team “sputtering in the second quarter,” although he stated that the reason might be due to three holding penalties and a sack on quarterback Matthew Stafford that dampened the drive of the offensive line to move the football down the field effectively.

Matthew Stafford was sacked a total of four times in the game against the Minnesota Vikings. His sack count last season totaled 23 sacks. His count is already at 21 for this year with just six games played, on pace to be sacked a possible 56 times by the end of the season. The Lions have provided many resources to polish Matthew Stafford including hiring offensive-minded Joe Lombardi as head coach, selecting pass-catching tight end Eric Ebron in the first round of this year’s draft, and signing receiver Golden Tate in free agency. With all the resources added to help him, giving him protection to use those resources is a must.

The Detroit Lions’ offensive line did see some successes in the game against the Vikings. Minnesota’s quarterback Teddy Bridgewater was sacked eight times, a franchise record for the Detroit Lions, by seven different players. He was also intercepted three times. Linebacker Tahir Whitehead intercepted two passes and notched six tackles. He is the first player for the Lions to have two picks in one game since DeAndre Levy did the same against the Cleveland Browns last year. Defensive end Ziggy Ansah forced a fumble and forced six tackles and 2.5 sacks.

Field goals still remain a problem for the Detroit Lions issues with their failing offensive line. The Lions signed kicker Matt Prater, after the last two place kickers for the Lions missed eight out of twelve fields goals combined. Prater missed two of his three attempts to get the job done. This leaves the Lions with a 5-of-15 record for field goals so far this season.

Coach Jim Caldwell said he will figure out what the problems are with the failing offensive line of the Detroit Lions and get them fixed. The most important thing for Caldwell is that the team wins, whether or not it looks pretty. Matthew Stafford stated that he is doing the best he can, and so is everyone else on the team. He is confident that the team will find ways to play better soon.

One Response to "Detroit Lions Failing With Offensive Line"