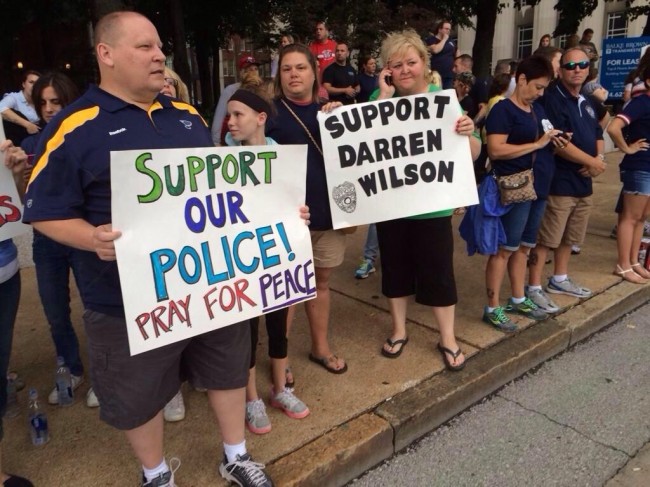 The first public account of the Michael Brown shooting by Ferguson police officer Darren Wilson has been released. According to federal law enforcement officials that have been briefed on the civil rights investigation into the shooting, Wilson told investigators that he was in fear for his life, pinned in his vehicle with Brown struggling to take away his gun. The testimony contradicts some eyewitness accounts, and does not explain why the unarmed young black man was shot six times. The death spurred protests in the Ferguson area, some of which have turned violent. More than 250 people have been arrested on various charges.

The account of the investigation was made to the New York Times, and is the first time Wilson’s perspective has been made public. Wilson’s testimony occurred in September before a St. Louis County grand jury, convened to determine whether there was probable cause that Wilson had committed a crime.

Just after noon on Aug. 9, Brown was reportedly walking down the middle of a Ferguson street with his friend Dorian Johnson. Wilson stopped his Chevy Tahoe S.U.V. and ordered them to the sidewalk. The encounter became a physical struggle, with Wilson and Brown entangled through the open driver’s-side window. Witnesses said that it appeared Brown was trying to flee, and that the officer was trying to pull him in. Witness Michael T. Brady said the struggle was “something strange,” and that he could not tell exactly what was going on. He could not see whether Brown was punching Wilson, but something was happening and “it didn’t look right.”

The officials speaking to the news about Officer Wilson’s recounting of events said that forensic evidence supported the Ferguson officer’s version  events. Wilson said that he was trying to leave his vehicle, but Brown pushed him back in. Wilson said that the two were struggling inside the S.U.V., with Brown punching and scratching him. He said Brown reached for the gun, which fired twice in the car, with one bullet striking Brown in the arm. Forensic tests showed Brown’s blood on the gun, the interior door panel and Wilson’s uniform.

Johnson’s description of what happened is very specific and detailed, and sharply contradicts what Wilson has told authorities. According to Johnson, the Ferguson officer was the aggressor, opening his door as he backed up his vehicle, causing it to strike Johnson and Brown. He told reporters after the shooting that Wilson reached out the window, grabbed Brown around the neck, and was trying to choke him. He said Brown was trying to get away, but the officer reached out and grabbed him, trying to pull him into the car. He said that Brown never reached for the officer’s weapon.

Johnson said that after the shooting inside the car the two ran. Brown then got out of the car and shot multiple times. Some witnesses have said that Brown had his hands in the air when he was shot outside the vehicle. Others said that he was approaching the officer when he was shot.

Benjamin L. Crump is the attorney for the Brown family. He has dismissed Wilson’s account of the events, saying that the officer would say whateverwas necessary in order to justify the shooting. Crump says that no matter what happened in the car, Michael Brown ran away from Wilson.

Two separate investigations into Brown’s death are ongoing, one by St. Louis County police and the other by the Department of Justice, questioning whether Ferguson police have engaged in a pattern of civil rights violations. The Times report said that so far evidence in the federal probe does not support civil rights charges against Wilson.