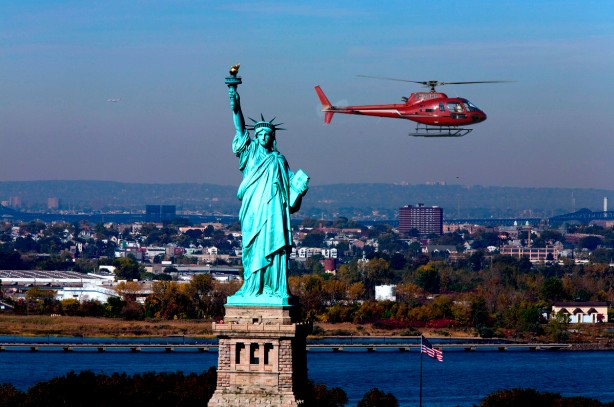 Halloween costumes are part and parcel of the holiday but what celebrants do not usually see is a stunt that has the Statue of Liberty putting on festive gear for the dress-up party. Designed as a marketing gimmick for a menswear brand, many people are not pleased with the idea of using the iconic statue for such blatant commercialism. However, designer Nick Graham is just looking for fun on a large scale and Lady Liberty playing dress up fits the bill nicely since the distance to Mount Rushmore made it impractical as a venue for the advertising campaign.

The plan is to make it appear by optical illusion that the Statue of Liberty is sporting a bow tie using helicopters to alternately dangle two ties, in Halloween colors, about 500 feet out from the statue making it appear from Manhattan Island that she is costumed in a bow tie. Graham will not be able to actually attach the ties to the statue because it would require National Park Service (NPS) permission.

Mindi Rambo, NPS spokesperson assured ABC News that no permit request had been received by the agency for the stunt nor would they allow it on the property if they were asked. The Federal Aviation Administration (FAA) controls the airspace around the island and some reports claim the design company has received FAA approval. The FAA reports that they have not received any such application, however, the Washington Times disclosed that Airads, the helicopter company hired to carry the bowties, has an existing FAA waiver for banner towing. They stated that this event falls within the bounds of their usual operations under FAA regulations although they plan to make contact with the agency before the event.

The massive ties are 30-by-60 feet long and 35 pounds. The festive menswear mockups are made of half-ounce coated nylon. One tie is black and the other one is orange. Both sport an eye-catching white polka dot pattern. The helicopters will fly at 30 to 35 knots (35-40 mph) at an altitude of 300 to 500 feet towing the promotional bowties up and down both the Hudson and East Rivers and by Lady Liberty for several hours promoting the new line. Nick Graham’s publicist, Kate Jacobsen assures people that this is actually happening and is not a joke or a hoax. It is however, a first for Lady Liberty who did not even dress up for her own birthday party.

The Halloween costume publicity stunt at the Statue of Liberty puts a spotlight on the launch of the Nick Graham menswear brand designed by Nicholas Graham, founder of Joe Boxer. The brands signature style features dramatic colors and unconventional patterns as the giant bowties will show upon their debut at 8:00 am on Halloween morning. Graham wants to get an early start so Lady Liberty will be the first costume of a day usually filled with celebrants decked out in every manner of costume imaginable – and sometimes unimaginable. Graham assures skeptics that his plan is all in the spirit of good Halloween dress-up fun.