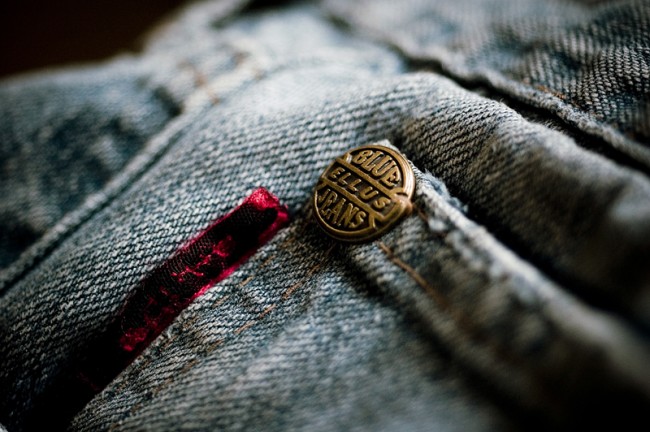 Apple has received yet another complaint  from users related to putting the iPhone 6 into pants pockets, specifically in this case denim jeans.  Users seeing a leak of the schematics this summer, many users were disappointed to see that Apple had opted to include protruding plastic strips on the back of the iPhone to accomodate antennas which were seen to ruin the streamlined look of the phone. These strips which, despite early reports that they would not actually be a part of the finished product, were still present on the models which were just released, and are now the subject of another issue of aesthetics. Some users are claiming that putting the phones in and out of jeans pockets has caused these plastic strips to absorb the dye from the pants and become discolored.

Calls to customer support about the problem have reportedly elicited the suggestion to scrub the color from the iPhone 6 strips with a mild detergent, though those attempting to do so have indicated that this  solution was ineffective in removing the coloring. There were no further suggestions given, and Apple has yet to respond with any official comment on the “dyegate” issue. The issue of phones in pockets has been a recurring theme since the release of the iPhone 6 and the iPhone 6 plus. None of the issues have appeared to slow down sales of the devices, however.

Despite typical supply delays, sales of the new phones have soared, and the company just posted record fourth quarter numbers. Estimates going into the Christmas season are very strong as well. Apple seems confident that they will not  suffer significant impact to those sales numbers as a result of the few reported problems surrounding the iPhone 6 and pants pockets.

The initial pocket concern was with respect to the larger size of the devices. While considered an upgrade from previous incarnations, the question arose early on whether or not they would present a portability issue. With few exceptions, however, the initial buzz about problems fitting in pockets disappeared as users found that the units fit just fine into most pants pockets. Once in the pocket, however, the next complaint arose in the form of “bendgate” where users began complaining that the phones were beginning to bend while under the pressure of being in those pockets. While much publicized, Apple has indicated that there were only nine actual complaints regarding this issue, and have not seen any drop in sales as a result. Early reports about the iPhone 7 indicate that the next incarnation will include the durable glass featured on two of the Apple watches currently, so the bending problem will not likely be a future concern. In actuality, it was barely a current concern.

With as much coverage as the iPhone 6 continues to receive in the media, every complaint inevitably surfaces as something new to talk about. The latest pocket problem of denim dye staining the plastic antenna channels on the phone is no different, and may well be a popular conversation in the short term. Given the iPhone 6 sales figures and projections, however, it seems unlikely that Apple Inc. will be making any major moves to remedy the concerns immediately.