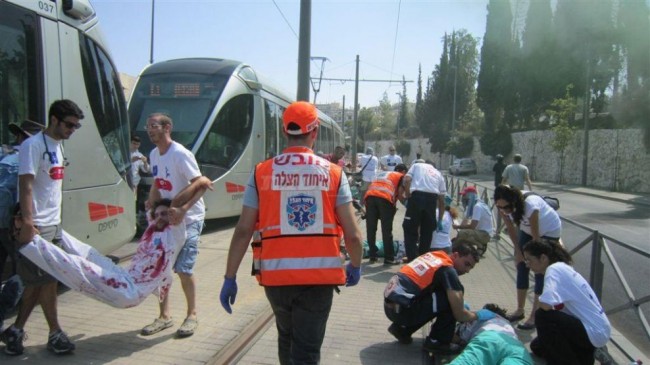 Jerusalem police have yet another violent tragedy on their hands in the beleaguered city as a convicted Palestinian, terrorist, fugitive took his escape vehicle barreling through a light rail station platform, killing an Israeli-American baby and injuring Israeli and American civilians, leading authorities to suspect the attack was intentional. Three-month old Chaya Zissel Braun died of her injuries while eight other victims were transported to area hospitals, two reported to be in serious condition. Traffic camera footage of the fleeing vehicle’s actions gives rise to suspicions that the driver deliberately headed for the Ammunition Hill station with the intention to mow down pedestrians within a few hundred meters of the national police headquarters, shortly after 6:00 pm Israeli time.

Police officials describe 20-year old Abd al-Rahman al-Shaloudy, a Palestinian resident of East Jerusalem, as a convicted terrorist who had served prison time for terrorism activities. After he killed baby Chaya and injured several American and Israeli civilians disembarking from the train in a vehicle owned by his father, he tried to flee on foot but was shot and arrested by police but later died in the hospital. The U.S. State Department has not yet released the victims’ names. Police are characterizing the incident as a suspected terrorist attack, according to spokesperson Micky Rosenfeld. Traffic cameras recorded the suspect’s car suddenly veering away from the main road and heading at high speed toward the rail station. The Palestinian neighborhood of Silwan, near the old walled city, is a hotbed of violent protest against Israeli settlers moving in. Mr. Shaloudy’s 15-year old brother was arrested also, in the wake of riots around the family home. Although no terror groups have claimed credit for the attack, Mark Regev, the prime minister’s spokesperson notes that the style of the attack, incitement is typical for Hamas.

Eyewitnesses to the run-over attack, report that Shaloudy’s car appeared out of thin air and drove about 50 feet on the tracks and hit a pole before exiting the car and trying to escape on foot. Another witness describes seeing the stroller shattering and the baby fly about 30 feet through the air as, the car hit a mother and her infant daughter and continued tearing through the onlookers. Rescue crews immediately turned their attention to baby Chaya and initially restored her pulse before rushing her via ambulance to Hadassah Har Hatsofim Hospital, accompanied by both parents, where she breathed with only ventilator assistance for two hours before doctors pronounced her dead.

Chaya’s grandfather, Shimon Halperin shared that having waited many years before successfully conceiving a baby, her parents are understandably quite shaken up and traumatized over her death. He had come to Jerusalem from America just especially to meet his granddaughter who had taken her first trip to the Western Wall earlier that day. Although he is heartbroken, along with her parents, he recognizes that the doctors did all they possibly could to save her so he thanks them for their efforts. Her funeral took place on Wednesday at midnight, in the Jewish tradition of respecting the dead with quick burials with hundreds gathering to honor and mourn her short life, including President Reuven Rivlin and Nir Barkat, mayor of Jerusalem.

Israeli Prime Minister Benjamin Netanyahu bulked up police reinforcement in Jerusalem following the attack on the baby and civilians and reiterated that the escalating violence and injury in the capital city is “intolerable.” He vows, along with the mayor, to take definitive measures to stop the killing and violence in order to restore Jerusalem to a state of peace and security and apprehend anyone suspected to be involved with today’s tragic terrorist attack. Spokesperson, Jen Psaki of the U.S. State Department issued deep condolences to the family and encouraged the public to stay calm and avoid making the situation worse. Barkat is determined to do whatever it takes to bring peace and quiet back to Jerusalem.