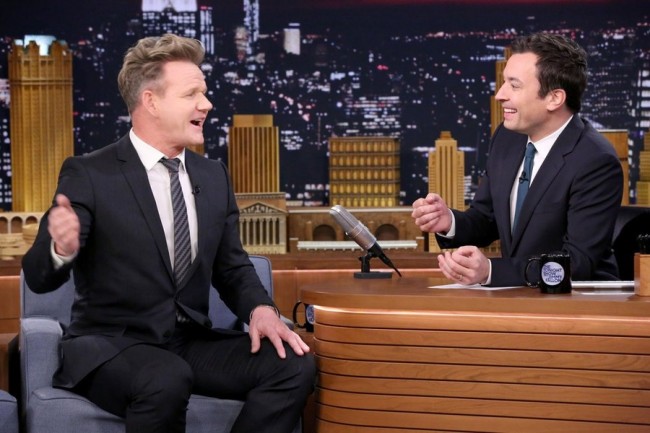 On The Tonight Show Starring Jimmy Fallon, his first guest was Chef Gordon Ramsay. Also, Fallon had kid inventors on the Tonight Show, demonstrating their inventions, or, as Jimmy Fallon called them, “GE Fallonventions.” The musical guest of the evening was the country western group, Little Big Town.

Jimmy Fallon welcomed his studio audience and then began his Thursday night monologue. “Apple’s CEO Tim Cook came out as gay. Knowiing Apple, a new Tim Cook will come out next week. The CEO of Samsung came out as being even gayer. Election night is only a week away — check out this guy John Burkhalter who is running for Lt. Governor in Arkansas. He had been a male stripper known as the Metro Express. More like, Tragic Mike,” Fallon said.

After that, Jimmy Fallon showed some people with their dogs dressed in Halloween costumes and he said what the dog was thinking, supposedly, in each example. It was a pretty funny comedy bit.

“Studies show that obesity rates have been on the rise in America,” Fallon said. Then, he showed crash test dummies that have had their weight increased from 170 to 270 pounds to more accurately reflect the weight of Americans.

Back from a commercial break, Jimmy Fallon showed pictures people sent in of homemade Halloween costumes in a segment where people sent in their Instagrams. He showed one woman dressed as “Dumbledore the Explorer.” Another person dressed up as The Rock in a photo The Rock showed Fallon on an episode of the Tonight Show. Yet another person, a man, was dressed in a Half Kenny Rogers/Half Dolly Parton costume. One lady sent in a photo of her baby dressed up as Richard Simmons. The final one he showed was of an adult man dressed up like Bud Lightyear. Then The Tonight Show Starring Jimmy Fallon went to another commercial break.

When the show returned, Jimmy Fallon introduced his first guest of the evening, Chef Gordon Ramsay. Fallon said “Season 2 of his Master Chef Junior show with kids on it as the chefs will premiere on November 4 — ladies and gentlemen, welcome Chef Gordon Ramsay!”

Fallon mentioned how Gordon often yells in the faces of the people on Hell’s Kitchen, and that he had a show called The F Word, where the “F” stood for “Food.” He also said that Ramsay had pigs he raised in his yard, and wanted to have his kids realize that they were animals going to be eaten. However, he said that his kids named them and treated them like pets. He was about to have them slaughtered, and he did, though he broke down and cried as both he and his kids had gotten too attached to the pigs. He said that he still enjoyed the sausages, though.

Then, Gordon Ramsay said that he had prepared a fancy meal for a girlfriend, including oysters. She was, it turned out, very allergic to oysters, and her face swelled up and she vomited all over the place.

Gordon told Jimmy Fallon about Master Chef Junior and how the winner gets a scholarship. The series is on Fox and the second season will be starting very soon, next week, on November 4. 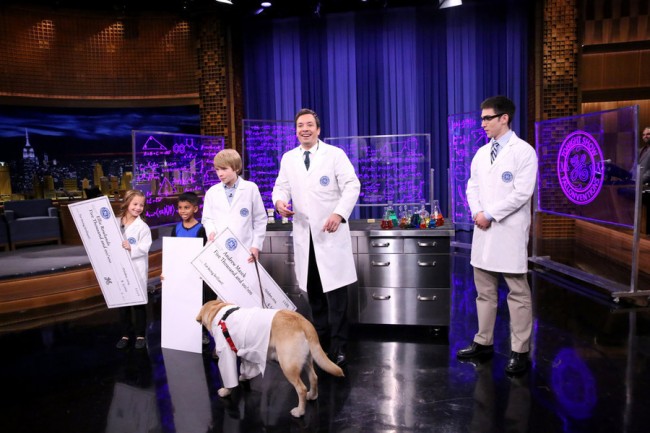 After another commercial break, the Tonight Show host, Jimmy Fallon, showed off kids and their inventions in GE Fallonventions. A young girl called Ellie was first, and she had invented “Ellie’s Jellies,” which would not rip bread. The jelly and peanut butter were in containers like deodorant often comes in, where a person can twist the bottom of the container and it forces the jelly, peanut butter, or deodorant, whatever the case might be, up. Then, Elie rubbed the containers onto bread, as did Fallon, to make a sandwich.

Justin, 7, from Texas, took off his lab coat and showed Fallon “The No-Sweat Sweat Shirt.” It was made out of a towel. Fallon asked him to do a push-up; it was not exactly a push-up, but close, sort of….

Then, Fallon introduced the last inventor, Andrew, 13, form Massachusetts. His dog was also on, Hawkeye, a Lab, wearing a lab coat. The invention was something called “Power Paws,” to re-charge a battery when a dog runs, so that the dog’s motion would power up the batteries. It actually worked. Fallon said that “GE is giving each of you $5,000!” 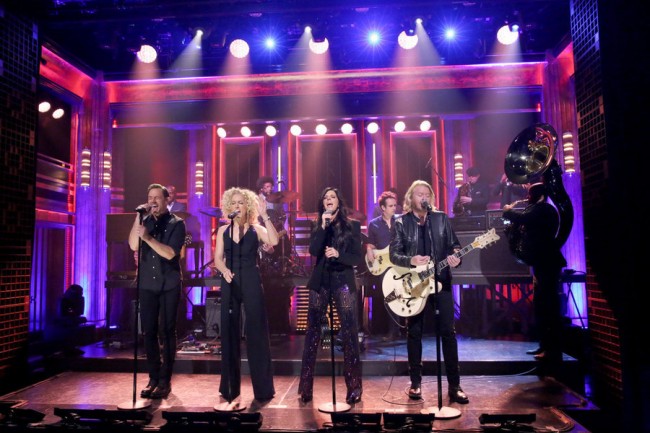 Next up on the Tonight Show, after another commercial break, Little Bit Town performed a song off of the group’s latest album, Pain Killer. They just released the album last week and were also inducted into the Country Music Hall of Fame. The group sang Stay All Night from the album. The song really ROCKED OUT! Though it was a country song, it definitely had parts of it that sounded more rock ‘n’ roll. It was a pretty cool song! The album, Pain Killer, is out in stores and available now.

Though Jimmy Fallon had on just one main guest tonight, Chef Gordon Ramsay was very entertaining and the segment on kid inventors, called Fallonventions, was very enjoyable to watch, also. The kids came up with some great inventions and will likely be big successes as they get older and make even more inventions. Little Big Town was awesome, as well, singing Stay All Night from the group’s new album, Pain Killer.