Jimmy Kimmel to Be Olaf From Frozen for Halloween? [Video] 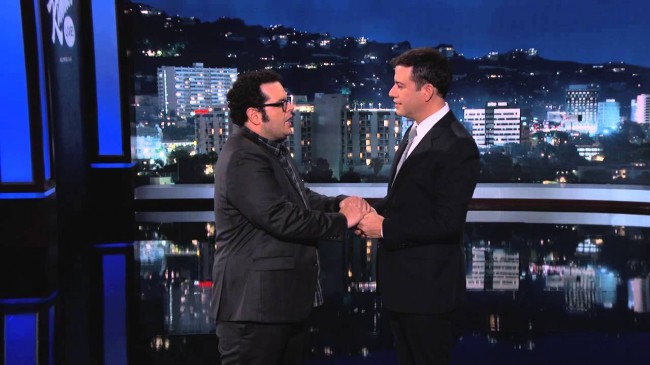 The fun begins when Josh Gad makes a surprise appearance on the Jimmy Kimmel Live show, and tries to convince the host to be Olaf from the hit move Frozen for Halloween. As many shows do at this time of year, all hallows eve is upper most on everyone’s mind, and late night TV is no exception. Josh Gad is the voice of Olaf from the mega hit movie, and the manner in which he tries to convince Kimmel to be the famous snowman is exceptionally funny.

Although Frozen made the actor a household name, Josh Gad has been acting for some time, with notable roles in Love and Other Drugs and 21. He graduated from College and also the school of drama, and was recognized for his humor as far back as 1999. This celebrated actor is also an accomplished comedian, choosing to emulate his idols from a young age. Robin Williams was one of his favorites, and as a young man, when he got discouraged his mother was there to give him the encouragement he needed to persevere in the industry.

Among his accomplishments, Gad has also been nominated for a Tony for his work in the musical The Book of Mormon. This is an honor usually bestowed on those trained in singing and vocals, which the actor is not. It is obvious that he has a fantastic voice, as he uses it in the convincing of Kimmel to play his Frozen character. For those that may not have seen this blockbuster movie, Olaf is an adorable and extremely animated snowman. He is a friend to the sisters, Elsa and Anna, and one of the most famous songs in the movie, other than Let it Go, is Do You Wanna Build a Snowman. A perfect character for Kimmel if ever there was one, as the late night host got his start as a comedian, and the spunky little Olaf is a delightfully funny addition to this movie.

Gads last movie Jobs, is the chronicles of Steve Jobs, and the actors take on why he may have gotten the role is very amusing. He is frequently heard in interviews that people believe he is tech savvy because he looks like a nerd. He also states that the afro-like hair from his Jewish side, may also be a contributing factor. Gad, when not making a surprise appearance on Jimmy Kimmel’s show, is often asked questions that in his words would be better answered by Ray Kurzweil. Fans may not know, but Kurzweil is a computer scientist, futurist, author and director of engineering at Google. That being said, some of the questions the actor gets must be very technical, which is why he seems to find it so amusing.

Taking one part Jimmel Kimmel the comedian, and one part Josh Gad singer/comedian and putting them on a stage together equals one epic bit. Fans of these two are in for a delightful rendition of Do You Wanna Build a Snowman, as only the Frozen actor could come up with. The only downfall to this bit of stellar interaction is that it is over too soon.