Medical Negligence in the News as Ebola Patient Dies 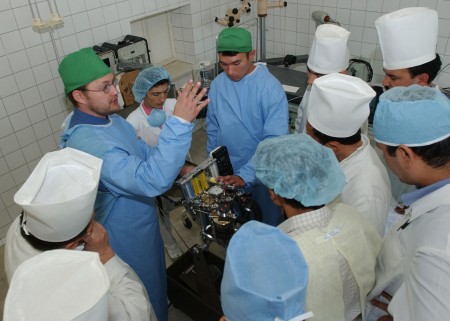 Medical negligence may be found to be the culprit behind a Texas hospital sending home America’s first Ebola patient.

Despite a sick patient, later diagnosed with Ebola, informing a nurse in the emergency room that he had just traveled from West Africa, it appears the nurse didn’t follow through and make sure the information was given to other hospital staff. The man was sent home with antibiotics.

Texas Health Presbyterian Hospital may be in a little trouble. At least it appears that they have some explaining to do after the staff sent the first, U.S. Ebola diagnosed patient home, after the patient looked for care at the Texas facility, despite having symptoms that were consistent with the Ebola virus.

Today, experts are asking the same question many other healthcare workers are asking. “Why wasn’t he immediately quarantined?” While the experts, and laymen, scratch their heads in amazement at how this situation could happen, maybe they need to become familiar with statistics about preventable medical errors.

According to the CDC, roughly 210,000 and 440,000 patients each year who seek medical help at a hospital for care suffer from some type of harm that was preventable yet contributed to their death. That estimate places medical errors as the third-leading cause of death in the nation, behind heart disease and cancer.

As bad as that is, Texas has it worse. Texas Watch, a medical watchdog group in Dallas claims that patient rights in the Lone Star State have been “decimated.” The passage of Proposition 12, passed in 2003, restricts the legal rights of Texans to the point of making it almost impossible to sue for malpractice.

With the state’s limit on reimbursement and other restrictions on healthcare recipients’ rights, cases centering around medical malpractice in emergency departments have been almost eliminated. “What Texans aren’t aware of is the legislators have required a standard of care so low it borders on almost no care,” says Brant Mittler, a San Antonio cardiologist.

Emergency rooms are not the only problem area in Texas hospitals. In 2011, the Texas Observer featured a story about Dr. Christopher Duntsch who arrived in Dallas to begin a neurosurgery practice. The Texas Medical Board got around to revoking his license in 2013, but not before Duntsch had left two patients dead and four paralyzed in botched surgeries.

Parkland Memorial Hospital, the hospital which received President John F. Kennedy after he was shot, became such a “serious threat” to patient safety that the U.S. Government has considered tossing it out of the Medicare program.

Centers for Medicare and Medicaid Services spokesman Bob Moore said, “Two [Parkland] violations dealing with infection control and emergency room issues were so serious they triggered the action of putting the hospital on ‘immediate jeopardy’ status.”

What is Medical Negligence

Medical negligence is another way of saying medical malpractice. Both refer to medical care that is inadequate, inappropriate or deadly through negligent action or failure to provide normally expected levels of care to a patient. When medical negligence happens, the injured party is frequently able to pursue legal action in search of a financial settlement.

Throughout the country, everyone is entitled to receive a certain level of health care. When a medical professional fails to meet the generally accepted standards, medical negligence occurs.

A faulty diagnosis that directly leads to the patient being injured is the basic form of medical negligence. These occurrences usually are caused by inadequate skill or care. The attending physician is required to do everything in their power to provide appropriate treatment to the patient to treat or rehabilitate the patient.

When medical negligence occurs, the actions of the physician are normally reviewed against the standard of competency and professionalism of their peers in similar situations. A brain surgeon will be held to a universally accepted standard of other brain surgeons, for example.

What if You Are a Victim of Medical Negligence?

Individuals who have suffered physical damage as a result of a physician’s wrongful actions often seek out the help of a medical malpractice lawyer who can help with medical negligence claims assist. Before retaining such a lawyer, all documents supporting the claim should be collected. The next step will be to file a medical negligence suit in the district court house having jurisdiction over the health care provider.

The Ebola patient in Texas is helping to focus attention on medical negligence elsewhere in the nation. Sending home a man infected with Ebola, where he went on to come in contact with 80 other people, is, some say, the “…inevitable consequences of ‘tort reform.’”