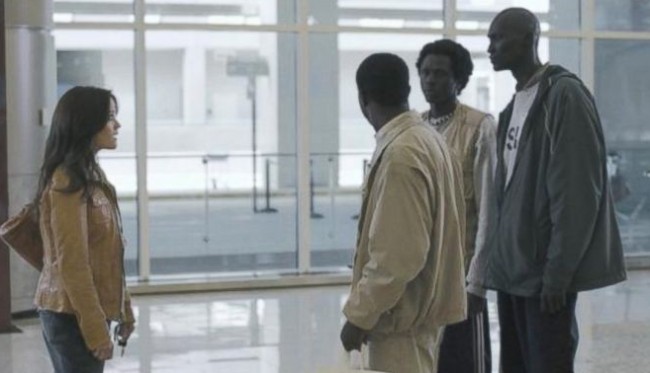 A movie that shows the horrors of war from the civilian perspective, terrible conditions, and children struggling to survive is usually hard to watch.  However, The Good Lie is an uplifting, must-see film that depicts the true ordeal children in Sudan encountered in a brutal civil war before the lucky ones got out. The actors who play the refugees are themselves former or children of refugees.

Reese Witherspoon may attract some who see the posters for The Good Lie. If she draws people in, great. The film needs to be seen, and her attachment to it may help it find an audience. Witherspoon is just a supporting player; the story focuses rightly on the children and the adults they become.

During the 1980s and 1990s, a religious civil war between Muslims in the north and Christians in the south left thousands of orphaned Sudanese children with a desperate choice. They could be forced to become child soldiers (or slaves, if female) of the Islamic Sudanese People’s Liberation Army or walk hundreds of miles through parched land, the war zone and areas with wild animals to refugee camps.

Screenwriter Margaret Nagle’s The Good Lie tells the story of a group of children who live on hope, even as their numbers dwindle on the harsh journey, and make it to the Kakuma refugee camp. The camp itself is not a great place, but there is food, shelter and medical care. There are also years of waiting in the hope of going somewhere else.

The children in The Good Lie are lucky ones. After years of growing up in the camp, they are brought to the U.S. by faith-based charities.

This is where Witherspoon comes into The Good Lie. She portrays a job placement counselor for recent immigrants in Kansas City. At first, the newly arrived Sudanese refugees are just more unskilled people to place in jobs. She does eventually learn more about the situation in Sudan, develops a friendship with them and, to a certain extent, they help her be less displaced. It is truly a supporting role, and Witherspoon is great in it, letting the African actors shine in their story.

One of those outstanding performances is by Arnold Oceng, who plays the adult version of the main character, Mamere, who is the “chief” of the small group of children trudging toward safety. In adulthood, he is still the chief and looks out for the others. Mamere balances his pride at making a new life for himself and his “family” and the recurring nightmares of his childhood.

In real life, Oceng’s father was from Sudan and his mom was Ugandan. After the father died and Uganda was flung into war, they immigrated to England, where Oceng grew up. Oceng has been an actor since arriving in England.

The other three African immigrants and co-stars Ger Duany, Emmanuel Jal and Kuoth Wiel. They trio, who were not experienced actors, are strong and compelling in their struggles to survive in Africa and in the American workplace/culture. Duany’s character, Jeremiah, feels a strong moral obligation to help others. Jal plays insolent Paul, who uses the marijuana coworkers give him to dull the pain of his PTSD. Wiel is Abital, who is separated from the others in America by bureaucracy. The trio are excellent in depicting a fictionalized version of a story that could be close to their own. Duany and Jal were actual child soldiers in the Sudanese civil war. Wiel was born in Ethiopia, the child of Sudan refugees, and her father later died in Sudan.

The actors and their surviving family members are the lucky ones. The United Nations estimates that South Sudanese refugees in neighboring countries will top 700,000 by year-end. As shown in the film, another casualty of Sept. 11, 2001, was the end of efforts to bring many to the U.S. and other Western countries.