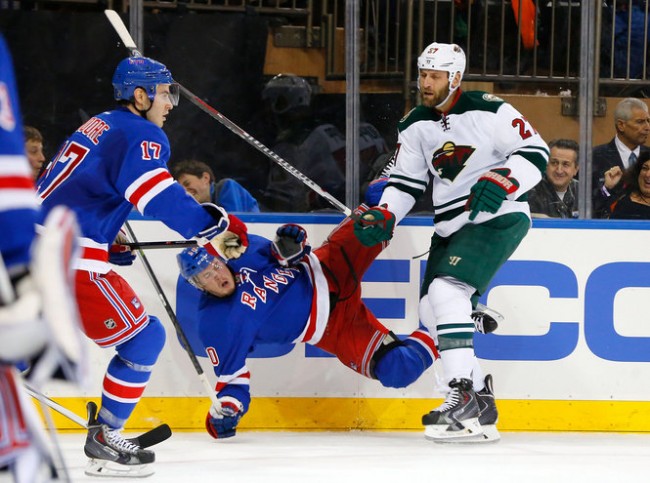 It is early in the NHL season, but narratives are already playing out for many teams. Teams like Carolina and Buffalo seem destined for the basement, while others like Montreal and Anaheim seem like conference champion contenders. There are also numerous teams trying for find their identity, and tonight’s matchup between the New York Rangers and the Minnesota Wild will feature two of them. Special teams, in particular, will be the key component to keep an eye on in this cross-conference game.

The New York Rangers have not had the started they wanted. After falling just short of the Stanley Cup last season, the Rangers were hoping to have a successful start this year. Instead, the team has posted a .500 record (4-4-0) and appear to still be looking for their game. Their victories were close ones, often requiring a comeback or overtime/shootout to finally seal the deal. On the other hand, their defeats have been blowouts, every loss coming by two or more goals.

A large reason for this concerning start is New York’s special teams. The Rangers are 2-for-22 on the powerplay, a measly 9.8% conversion rate. Their penalty kill is not much better, having given up six goals on 29 chances, putting their kill just below 80%. Given the talent level on the New York Rangers, especially with the likes of big powerforward Rick Nash, this kind of production on special teams is unacceptable.

“I think it’s a concern,” Nash said. “It’s an easy excuse when people say it’s early in the season. It’s gotta be better…It’s up to us to get the job done.”

One team that may share their early season woes is the Minnesota Wild. Minnesota has played the least amount of games in the league thus far, as their schedule has put the games few and far between. However, in their six games, the Wild hold a 4-2-0 record, with their only losses being close 2-1 losses to two of the league’s best teams. Much like the New York Rangers though, the Wilds’ special teams are struggling early in the season.

Despite having the likes of Zach Parise, Charlie Coyle, and Mikko Koivu on their roster, the Wild have yet to score a powerplay goal this season. Going 0-for-20 in their opportunities, Minnesota has the unfortunate distinction of being one of only two teams that has yet to cash in on a powerplay chance. In spite of this, head coach Mike Yeo does not see a reason to panic.

“I’ll be honest, I’m not worried about [the power play] as long as we continue to handle it the right way,” Yeo said. “What I think we have done a good job of so far is being able to push it behind and make sure we’re ready for that next shift. We haven’t had a lot of carryover.”

Yeo went on to say that the team’s play at even-strength should be the focus, as the Wild are one of the league’s best at 5-on-5 play. Minnesota has allowed only three even-strength goals in six games, and young goaltender Darcy Kuemper has posted a shutout in three of his five starts this season. If Minnesota can turn their powerplay around, they could easily be a darkhorse candidate in the Western Conference.

If their performance this year is any indication, tonight’s game between the New York Rangers and the Minnesota Wild will be a low-scoring affair. Both Kuemper and Rangers’ goaltender Henrik Lundqvist have shown the ability to protect the net with ease, and given the struggles both teams have had in their powerplay, there is little reason to expect a goal-fest. Though the Rangers may have the advantage by playing at home, the Wild are coming off a 7-2 victory over the Tampa Bay Lightning, putting the victor of this cross-conference matchup very much in doubt.