Ouija: No Need to Tell Yourself It Is a Game (Review/Trailer) 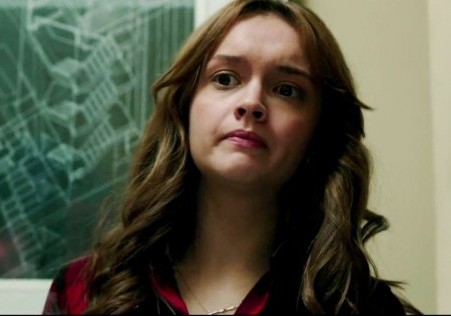 Ouija has a tagline that goes, “Keep telling yourself it’s just a game.” In reality, there is no need to do that, the film is not that scary. While it attempts to fall fully into the horror genre it really is a combination ghost story/mystery. A group of youngsters have one of their number kill herself and the gang attempt to track down what really happened. This is after the one girl who dies tried to unsuccessfully destroy a Ouija board by burning it and the planchette that goes with it.

The movie starts with two little girls playing with the “spirit” board and one explains the rules to the other. Number one on the list of “don’ts” is that one should never operate, or play, the board alone. Of course as the film fast forwards to the present the blonde girl, now all grown up, is doing just that. No surprise then that this is the first victim in the movie. Incredibly, despite the amount of real life negative press that the Ouija board has received over the past few years, the film’s premise is that the young people involved all treat the Hasbro board as a game.

Although that soon changes after the little group attempt to get in touch with the first girl who died after playing the Ouija board alone. The young adults come in contact with an evil presence and the problems, along with the body count, commence and grow. To be fair, the film is entertaining and has at least two good jump scares and one scene that produced full body goosebumps. Overall, however, the scares were a mixed bag, some working better than others. One of the things that the film did well were the “fake out” scare scenes, great buildup and then a let down that was not over the top or exaggerated for effect.

Directed and co-written by Stiles White; who has a solid background in the world of FX – think Stan “the Man” Winston Studios here and a long list of films with his name attached to the credits. This is White’s debut as a director and it is a great start. His cast all do well in their roles with Mancunian actress Olivia Cooke proving that her acting chops are just fine on either side of the big pond. Although White does an adequate job at delivering in Ouija, there is no real need to “tell yourself it is a game.” Kudos are in order for the marketing campaign who obviously dredged up the idea from the old “keep telling yourself, ‘it’s only a movie!”

Referring to casting, actress Ana Coto, who plays the younger sister of Cooke’s character in the film, looks enough like the English performer that they really could be sisters. It also should be mentioned that Lin Shaye is a delight to watch regardless of how big her role is. As usual Ms. Shaye knocks her part right out of the park as the wheelchair bound “survivor/murderer.”

Ouija is classified as horror and while it does fit into this genre very well, the film really does feel like more of a thriller/mystery wrapped around a ghost story that evolves from a Hasbro game. As the director has the Stan “the Man” Winston connection it is no surprise that the spectres and FX in the film were top notch. The only word of complaint could be “bubblewrap” as that is what the pool cover in the film actually looked like.

While there is no need to tell “yourself” that this is a game, Ouija is a fine offering for Halloween this year and opens nationwide on October 24. Sure there is no “Freddy Kruger” or “Michael Myers” here but the 20 something leads are attractive and they die in something akin to slasher film slaughter tradition sans gore but they are not as dumb as the average victim in that verse. This is a popcorn tossing film, at least a couple of times, and viewers should be prepared to develop a phobia about flossing that may have the American Dental Association up in arms.

2 Responses to "Ouija: No Need to Tell Yourself It Is a Game (Review/Trailer)"