Ralph Hall: Oldest Member of the U.S. House of Representatives? 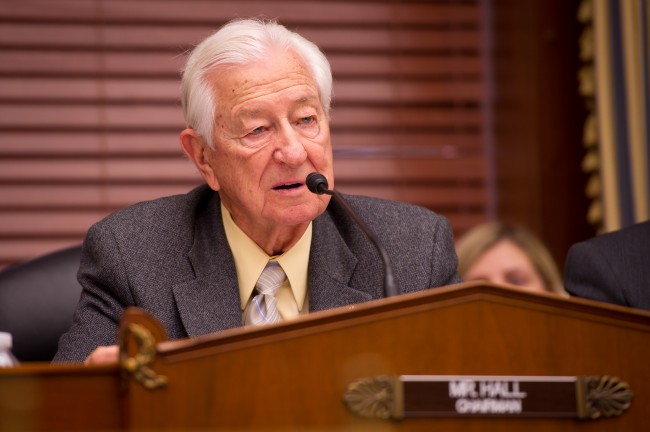 Ralph Hall, who is the oldest member of the U.S. House of Representatives at the age of 91, was injured in a car accident in Texas on Saturday, Oct. 4. Paramedics were called, and although Hall was alert, a press release later claimed he suffered a hip injury, as well as minor cuts and bruises.

The congressman holds the distinction of being the oldest-ever member of the U.S. House of Representatives. In 2012, he broke the record that was held for over 80 years by North Carolina Representative Charles Manly Steadman who died in office at the age of 89 in 1930.

It seems senators are the ones who are fortunate enough to surpass representatives in terms of their age while serving. South Carolina Senator Strom Thurmond died in office at the age of 100 in 2003. New Jersey Senator was 89 when he died in 2013 and was the oldest senator serving at the time.

Although the senior representative lost the Republican primary in Texas in May 2014 to 48-year-old John Ratcliffe, he will remain in the House and continue to serve until the last day of December. When he was faced with the runoff this year by Ratcliffe, it was the first time his position had been challenged since taking office in 1980. After the loss, Hall told reporters he had no intention of retiring and would stay on until his last day on the final day of the year.

Ralph Hall’s other claim to fame beyond being the oldest living member of the U.S. House of Representatives is that, as a young boy, he came into contact with outlaws Bonnie and Clyde. At 12 years old, he was working at a pharmacy close to Dallas when the bandit duo stopped in to purchase cigarettes–Old Golds, he remembers–two Coca-Colas and as many newspapers as they had. He says they told him to keep the change.

Other than that, his life and career appears to have stayed on a more customary albeit accomplished path, including service during World War II in the U.S. Navy, graduation from Southern Methodist University and admission to the Texas Bar. He was married to Mary Ellen Murphy from 1944 until her death in 2008 and is the father to three sons and grandfather to five.

When asked two years ago what he did to stay healthy, the oldest member of the U.S. House of Representatives simply stated that he lived clean. However, those who knew him well reported he ran two miles per day and did fifty push ups when he woke up in the morning.

After the Oct. 4 car accident, Representative Hall was airlifted to Medical Center of Plano. The accident occurred when, returning from the Fannin County Parade, the Republican congressman was a passenger in a car driven by a friend. A 23-year-old driver reportedly turned left in front of the vehicle Hall was riding in.

The driver of Hall’s vehicle, friend Howard Zielke, was admitted to a local hospital. The status of his condition has not been disclosed. The status of the 23-year-old driver of the other car, Zachary Bohannon, was also not released. According to a hospital spokesperson, the oldest living member of the U.S. House of Representatives Ralph Hall is in stable condition.