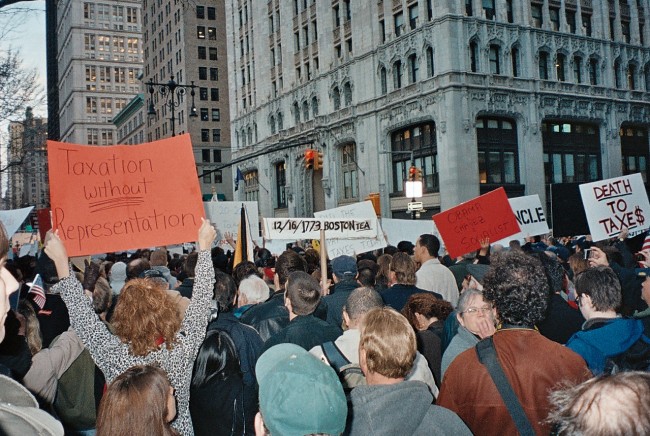 Those who make their living opining on politics can have a short memory when it suits, and these days much ado is made about a revolt within the Republican Party. It is said of those Republicans who do not fall in and form rank on order, the Tea Party as they are called, that they are obstructionist, hyper-conservative and most likely extraordinarily racist. They are wrong, however, and here will words be writ to tell the tale of how the Republican Party accidentally caused the rise of Libertarianism.

It was six long years ago, in the campaign season that preceded Senator Barack Obama’s ascendance to the highest office in the land, that a quirky yet endearingly earnest Congressman from Texas hit the political headlines with a seismic impact that re-defined the Republican Party, and of which the aftershocks are still making headlines to this day.

Once upon a time there was a presidential election cycle in the throes of the Great Recession. Home prices were falling, capital was frozen, and retirement accounts of ordinary citizens were suffering tremendous losses. Citigroup stock was a dollar a share, and financial institutions such as Washington Mutual were being crumpled up and tossed like busted Powerball tickets. Times like those require sacrifices to convince the gods of money to “make it rain” again, and the lawsmiths looked to the High Priest Alan Greenspan divine that which they needed to appease said deities. Greenspan poured over arcane texts for an interminable time, called upon the spirits of economists past and cast runes before coming up with the solution. He would summon a great evil, named Quantitative Easing, to tear down the fundamental laws of economics and inflate the currency through surreptitious means.

In that age, the Republican Party was confused and adrift. For generations past, they had been champions of the economy and had valiantly fought against those who would distort it in unnatural ways. But since the days of Ronald Reagan, the greatest of the Republicans, they had lost their calling. They had amassed a staff of advisers, each of whom would make Grimer Wormtongue look pleasant and neighborly, who they called “lobbyists”. These lobbyists convinced them that if their enemies, the Democrats, could gain political power by means of promising bread and circuses to the peasants, that they then could do the same for multinational corporations. The Republican Party simply needed to pacify the citizenry by convincing them that powerful leadership was necessary, which would be done through the construction of a Frankensteinian monster to be named the War on Terror. What were a few trillion dollars among friends?

So it was in this darkest hour that a hitherto unknown doctor and congressman by the name of Ron Paul came forth.

The Republican Party, by way of arcane legislative procedure that had gone overlooked, were caused to include this Libertarian in their televised councils (called “debates”), accidentally giving rise to the multimedia dissemination of his principles throughout the land. Congressman Paul pointed to the demon of the financiers and the golem of the Republicans and cursed them publicly. He emboldened the people by the utterance of sacrilege against the state. He wove them tales of the proud, free people that they could be, people who may not need their constitutional rights suspended to remain safe from terror. The Republican Party leadership grew furious, as this interrupted a conversation between Rudy Giuliani and John McCain. Those two paragons of the Republican Party had been pounding their chests in display of pseudo-masculine posture and boasting of whom could deliver more and better blows by foot to the posterior of the terrorists, until this provocateur had intervened.

Alas, happily ever after is not for tales such as this. Congressman Paul was defeated in a style which evoked the truest essence of Voltaire’s prayer, “Dear Lord, make mine enemies ridiculous.” The powers at the helm of the Republican Party had colluded to deride his remarks with laughter and incredulity, in a manner which chaffed many of their plebeian constituency. What Congressman Paul had done in his time with the Republicans was to show the working class the financial unsustainability of the net effect of the policies both parties had wrought, and to convince these new malcontents that their constitutional rights were too rare and precious to be negotiated away for the appeasement of constructed horrors.

These acolytes of his, after the election was over and President Obama sat the vaunted office, went to continue on their path and demand concessions from the Republicans for continued support. At first, they became known as the Tea Party, and the viziers and lobbyists conspired to put words in their mouths publicly, and co-opt their movement, in what some have called “astroturfing.” The Democrats became enraged and felt their rhetoric threatened, much like the Republicans, and so issued forth the proclamation that they of the Tea Party were racist, homophobic, misogynist and vile, to sour the others of the public against them. Some of these early Tea Party folks split off and began to call themselves Libertarian, in honor of Congressman Paul. Others stayed to fight for the honor of their name. The distinctive characteristic, and manner in which one can determine the true lineage of a Tea Partisan, is that their primary concerns were, and should always be, toward the debt incurred by the construction of those previously told monstrosities. And that is the true story of how the Republican Party accidentally caused the rise of many of today’s Libertarianism.

Satire by B. J. Whittemore