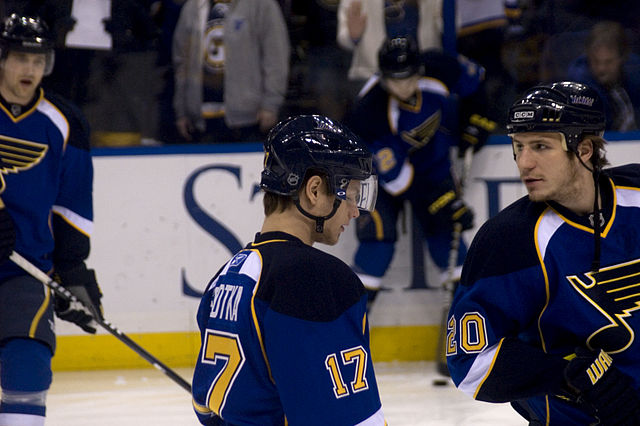 With the start of hockey’s regular season only a week away, the Guardian Liberty Voice will be taking an in-depth look at the 30 organizations, one for each day. Today, 30 in 30 will look at the St Louis Blues. The Blues are a difficult team to judge, because they may be one of the most well-rounded teams in the league. From forward, to defense, to goaltending, St. Louis has no real weakness in their lineup. However, while they do not have many weaknesses, they do not really have a standout strength either. Their roster is full of players that are above average, but just below true elite talents. Without that elite talent, the question arises: Are the St Louis Blues threats for the Stanley Cup or just paper tigers?

Last Season – The Blues began the season like most of the Central Division. That is, they won a lot. St. Louis posted a 29-7-5 record in the first half of the season, including a stellar 11-3-1 record in the month of November. Their first half of the season was led by one player in particular. Winger Alexander Steen began the season with 14 goals in the team’s first 14 games, and finished November with 20 goals, tying him for the NHL lead at that time with Alexander Ovechkin.

The St Louis Blues matched their November record in March, posting another 11-3-1 record that month. With the hype surrounding the Blues at an all-time high, thanks in part to the outstanding performance T.J. Oshie had in the Sochi Olympics for Team USA, as well as great grab at the NHL’s trade deadline, many were expecting St. Louis to make a deep run in the playoffs. However, the month of April quickly put a stop to the hype train. After going through the first 76 games with only 17 regulation losses, the St Louis Blues lost their final six games of the regular season, essentially limping into their first round matchup.

Against an experienced, playoff-hardened team like the Chicago Blackhawks, the first round ended as well as one could expect for the Blues. Though they won the first games of the series, both in overtime, the long losing streak at the end of the season caused a loss of confidence in many St Louis players, allowing the Blackhawks to advance in six games.

The Offseason – Despite the poor finish to last year, the Blues knew they had the pieces to make a deep playoff run. Thus, they spent the offseason ensuring that those pieces were around for a few more years, as well as shedding some of the non-essential players.

The Blues allowed goaltender Ryan Miller to hit free agency, despite the hype surrounding the acquisition at last year’s deadline. Miller never truly adjusted to the St. Louis roster, and was a large reason why the Blues finished last year on the losing streak and bowed out early in the playoffs. For a player as talented as Miller, a .897 save percentage in the first round was unacceptable. St. Louis did sign Brian Elliot to a three-year contract extension in may to ensure their goaltending was set for the next few years.

The St Louis Blues’ biggest acquisition in the offseason was signing center Paul Statsny to a four-year, $28 million contract. Statsny played last year with Central division rival, the Colorado Avalanche, but quickly found himself as the odd man out as Colorado drafted younger centers. The Blues may have overpaid a bit for Statsny’s services, but he gives them yet another Top 6 player, of which a team can never have too many.

St. Louis fans will also be happy that the team was able to reach a deal with restricted free agent Jaden Schwartz, signing him to a two-year, $4.7 million deal. Schwartz was a young player looking for a bit of a pay raise, but with only one full NHL season under his belt, it was difficult for the Blues to pay him what he asked. However, the young player has a nose for the net, which he showed quite often last year to the tune of 25 goals. At only 22-years-old, Schwartz could easily put up 30-40 goals in the future if he continues to develop.

What to Watch for This Season – With many teams making moves in the offseason, while the Blues stayed relatively the same, it is difficult to predict where St. Louis will end up this season. The entire Western Conference has seemingly gotten stronger over the offseason, and the Central Division, in particular, has become a sort of arms race to acquire the most talented lineup.

Alexander Steen will likely not have the same hot start that he had last year. A great goalscorer in his own right, but the 33-goal season seems like a major outlier in his career thus far. The Blues are deep enough to win games without Steen scoring in every game, but the more the winger produces, the higher the team is likely to finish at the end of the year.

Though Elliot was signed to three-year contract extension, do not overlook backup goaltender Jake Allen. The 24-year-old has already shown some success at the NHL level, and after having a stellar year with the Blues’ AHL affiliate, the Chicago Wolves, last year, the young goaltender seems poised to breakout in a big way. It seems unlikely that he will steal the starting job from Elliot outright, but stranger things have happened over the course of an NHL season.

It would be money well spent to bet on the Stanley Cup remaining with a Western Conference team this year. The West, simply put, seems to have more Cup contenders this year than the East. However, it is difficult to put the Blues as a part of that group. With no real elite talent to lead the team, one would be hard pressed to put the team ahead of the Toews-led Blackhawks or the Quick-led Kings. This year may change that. This year may be the year the St Louis Blues decide whether they are Cup contenders or simply paper tigers.

Join the Guardian Liberty Voice tomorrow as 30 in 30 will examine the Tampa Bay Lightning and how the loss the Marty St. Louis may affect the team. Also, check out yesterday’s team, the San Jose Sharks.