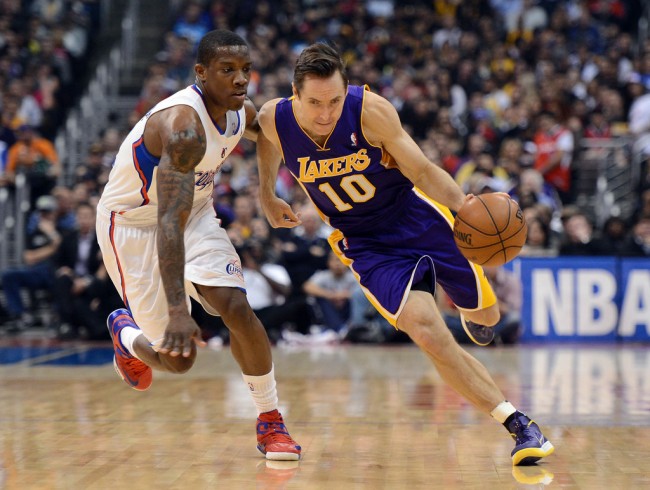 After the long awaited return of Kobe Bryant, Los Angeles Lakers fans looked forward to seeing their team whole again, until news came out that Steve Nash will likely miss this entire season and might possibly retire. Two-time MVP Nash has been one of the greatest players to grace the National Basketball Association with his presence, and will likely leave the game of basketball considered one of the greatest point guards to ever play.

40-year-old Nash has seen a host of ups and downs as a member of the Lakers. He sustained an injury in just his second game wearing the famous purple and gold, which turned out to be a broken leg. During the collision with Portland Trailblazers point guard, Damian Lillard, Nash also sustained nerve damage to his back. He would miss about seven weeks due to the leg injury, but would never return the same player because of the damage caused to his back. The damaged point guard would only play in 15 games in year number two. Year number three will feature a $9.7 million payout to Number 10, but no on-court contributions.

League personnel and players around the NBA have always respected Nash’s professionalism, and the way that he always treated his body as his temple. He worked hard in the off-season when most players would just work to maintain and not get too out of shape. He could be seen visiting professionals and coaches, and famously practicing his dribbling skills with tennis balls. During the season, Nash was a model athlete in his eating, stretching, and breathing exercises. He could even be seen often lying out on the sideline to stretch out his back to make sure that he never got tight. Nash was not a player blessed with a freakishly athletic or maintenance free body, but he did everything he could to always stay in pinnacle shape.

Superstar two-guard Bryant said of Nash that he knows his point guard did everything in his power to make it back to the court. Bryant explained that the point guard’s ailing back as “not an age thing” but as an “injury thing,” telling reporters that the Santa Clara product had struggled with his back throughout his career and even in his prime, but that it all has finally caught up with him. Bryant told reporters that he might make the same decision to shut it down for the season if he were in the 40-year-old’s predicament.

Most of the problem that fans have in coping with this news is that they never really got to see the “real” Steve Nash: the creator, the pick-and-roll genius, the gun, and the two-time, back-to-back NBA most valuable player. There were dreams of a championship the year that he and the NBA’s “best center” Dwight Howard, joined the Lakers. Nash is still entitled to his full compensation for this season, but this is the last season of his contract. He will likely miss this entire season and leave Jeremy Lin to take over as the starting point guard for the Lakers. Although the point guard has still not announced that he will retire, he has played in a small percentage of the games he would normally expect to play in three seasons, and he will only continue to get older. Nash turns 41 in February.

The Lakers may look to trade away Nash, using his expiring contract as bait to bring in a good player. So far that decision has not been made, because the best-case scenario in this situation is that after a few months Nash comes back refreshed and ready to make a run for the playoffs. If the NBA has seen this fan favorite pour in buckets and dimes for the last time this preseason, basketball fans have witnessed a master playmaker, and a man play dominantly in an era where one must be a superior athlete to make an impact. He never dunked in a game, and was rarely faster or stronger than the opposing point guard. Many Lakers fans and basketball fans will remain optimistic, but professional basketball as probably seen the last of Steve Nash as he will most likely miss the entire season and possibly never return.