By Michael Smith on October 11, 2014Comments Off on Taylor Swift Versus John Cleese on British Television 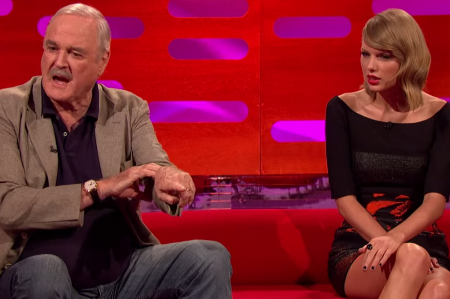 On the BBC One Graham Norton Show it was Taylor Swift versus John Cleese on British television where first Graham and then Cleese poked fun at Taylor’s love of cats. to be fair, Norton took the avenue of foretelling that Swift would one day have 17 cats and stage whispered “Here comes Taylor, crazy cat lady.” The Shake It Off performer replied that would be a few years down the road before that happened. After the joke he then moved on to show a picture of Taylor’s cat to John Cleese and the audience.

The former Monty Python member took one look at the creature and turned to Swift asking, “How did it have the accident.” The I Knew You Were Trouble singer looked confused and asked, “What?” The comic performer, actor and writer then went to claim it was the weirdest cat he had ever seen. Swift clearly did not know how to respond and pursed her lips, looking as though she were about to let Cleese have both barrels when Norton stepped in.

The third guest on the sofa, cricket player Kevin Pietersen found the whole thing very amusing. Host Norton quickly told the Fawlty Towers creator that he could not call anyone’s cat odd looking and put up a picture of Cleese’s cat being held aloft by Mrs. Cleese. The Spud 3 star quickly interjected saying that the one on the left was his wife. He also explained that the massive creature, the cat not his other half, was an American breed and that the animal did not want to come on the program. At this point on the British television show, it was not quite yet Taylor Swift versus John Cleese time.

Norton then revealed that Pietersen did not like cats as he is allergic to them. At this point, Taylor slid away from the cricketer towards her previous tormentor Cleese who also moved away. The audience also found this vastly amusing. Kevin actually explained that the reason he was not fond of cats was that they can sense when someone does not like them and comes to sit either on their lap or by their feet. Both Taylor and Cleese appeared to agree that this was the case.

Pietersen then went on to explain that he likes the “big” cats, lions, tigers, et al that he sees on safari and prefers to see all animals in their natural habitats. While this apparently got the sportsman a break from the audience, Swift slid even further from Kevin on the sofa. While the cricket player continued to explain himself, Cleese got on a roll and stated that he liked cats much more, as dogs were too subservient asking their masters whom they should bite next.

The comic icon then overstepped himself by saying that cats “are unpredictable and cussed.” As Cleese made this pronouncement this he turned to Taylor and said, “you know?” Swift smiled sweetly and then with that Taylor steely-eye said in a saccharine but deadly tone, “Oh we don’t want to do that.” John Cleese then turned to Graham Norton clearly enjoying his versus moment with Taylor Swift and getting the frosty edge of her feminist stance. The audience on the British television show enjoyed the joke almost as much Cleese. The video below shows the moment that Taylor let her cat’s claws out for just a moment. Priceless.