The Book of Life: Zoe Saldana and Ron Perlman Have Something For Everyone 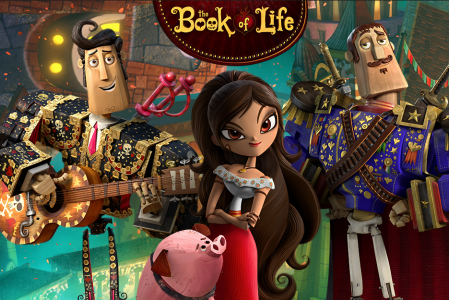 Reel FX teams up with Twentieth Century Fox to bring the animated feature The Book of Life to screen and the film has something for everyone, including Ron Perlman and Zoe Saldana who make a great double act for all ages. Produced by Guillermo del Toro, co-written and directed by Jorge R. Gutierrez the movie starts in modern times with five students who are, as a hapless museum tour guide puts it, the detention kids.

Tour Guide Mary Beth (Christina Applegate) takes the children through a special door into the Mexican exhibit of the museum where she shows them The Book of Life and tells them the story of a love triangle in the olden times of Mexico. Before telling the schoolkids the tale Mary Beth explains The Day of the Dead to the youngsters and what the celebrations actually mean. She also shows them the wooden figures who represent the players in the tale and explains just what The Book of Life is.

The story from the book begins with three children, Manolo, Joaquin, and Maria who are inseparable, they spend every moment together. Manolo is meant to be a great bullfighter, like his ancestors and his father Carlos Santos, Joaquin is destined to be a great hero like his father, and Maria has no real destiny until her father sends General Posada sends her to Spain to attend a school for girls. It is, after all, the old days in Mexico and the rest of the world and feminism has not been invented yet. The one “fly in the ointment” is Manolo’s desire to be a guitar player and a singer instead of a matador

Before the three children are separated La Muerte (award winning Mexican actress Kate del Castillo) and Xibalba (Perlman) bet on which of the two boys will marry Maria when they grow up. If La Muerte wins, Xibalba is to stop interfering with men’s destinies and if Xibalba wins he will replace La Muerte as head of The Land of the Dead. Years pass by and the three have grown up. Joaquin is indeed a hero to the town and Maria returns from Europe well educated and a young lady with an independent streak who knows her own mind.

Manolo still plays the guitar, much to his father’s annoyance, and has failed as a matador since he refuses to kill the bull at the end of the fight. The two young men both vie for Maria’s hand and when it looks like Manolo will win, the one that La Muerte picked to win, Xibalba steps in and cheats.

The Book of Life, starring Ron Perlman, Zoe Saldana, Channing Tatum, Kate del Castillo, Diego Luna and Christina Applegate has something for everyone. The film’s CG animation is beautiful and the color palette used is breathtaking. The choice to have all the animated characters remain wooden dolls, as they are presented at the beginning of the film gives the movie and its characters a special edge of whimsy that keeps the action from being too harrowing for younger viewers in the audience.

The musical score is brilliant and has obviously been done for the adults in the audience. During Manolo’s big bullfight, Ennio Morricone’s Ecstasy of Gold, done by the maestro for the Italian spaghetti western The Good, the Bad & the Ugly is used to great effect in the scene and has apparently been included for the parents to enjoy. It is this “nod” to another genre which makes The Book of Life enjoyable for the older viewers.

Just as the catchphrase of the children is a nod to DreamWorks SKG – who produced along with Gran Via Productions the 1999 comedy Galaxy Quest whose main character utters the words, “Never give up, never surrender.” DreamWorks Pictures were originally meant to produce the film until creative differences caused the project to fall off the studio’s list. The three kids use the Galaxy Quest call even when rescuing piglets, and a plethora of other animals from the local butcher. A move that gets Maria banished to Spain.

Leaving nods and winks to other films aside, The Book of Life also has a female protagonist who is not a run-of-the-mill damsel in distress. Her character is another in a long list of positive role models for young girls. Maria and the other characters were a hit with the audience and this was in evidence at the screening attended by this reviewer which had children of varying age groups attending and they were all spellbound by the production. Their parents enjoyed the action immensely and all the jokes aimed at the grownups went over very well. It should be mentioned that apart from Perlman, Saldana, Tatum, Applegate, del Castillo and Ice Cube as the Candle Maker; kudos should be given to Danny Trejo, Gabriel Iglesias, Hector Elizondo and Cheech Moran who all have parts in The Book of Life, with a cameo performance by opera legend Placido Domingo, and they all bring something to the table.

Disney Studios could take a lesson from Reel FX with their 3D film The Book of Life with Ron Perlman and Zoe Saldana, a movie that has something for everyone. This animated feature opens across the country on October 17 in plenty of time to be seen before the The Day of the Dead. Some smaller children may find the movie intense in places but the use of wooden dolls, as mentioned before, stops any negative events from being overwhelming. Rated PG, this is a real family film which everyone from the youngest child to Grandma and Grandpa can enjoy, Reel FX have shown Disney up at their own game. Be prepared to be enchanted with The Book of Life.