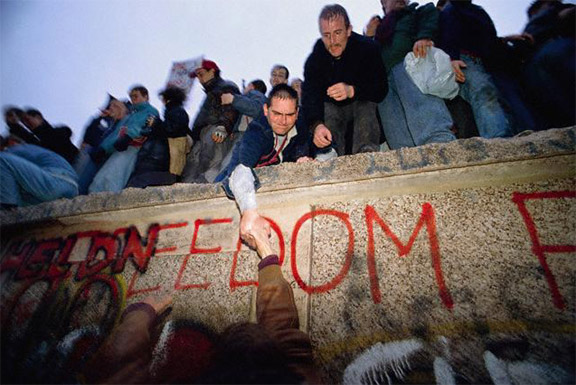 Sunday marks the 25th anniversary of the end of one of the most prominent symbols of the Cold War – the Berlin Wall. More than one million people are expected at the 25-year celebration of the falling of the Berlin Wall on Nov. 9, 1989.

The iconic barrier that walled in the people of East Berlin was erected literally overnight in 1961 to stop the flood of East Germans escaping to the West. By the time the wall was erected, one-sixth of the East German citizens had already left to avoid Communist rule.

Initially a chain link fence with barbed wire that split streets, the already-divided country’s capital and families in half. The Wall eventually morphed into two concrete barriers with a 160-yard strip made up of watchtowers, guard dog runs, flood lights, trenches and machine gun toting East German guards at the various checkpoints that allowed those authorized to cross. The barrier was roughly 96 miles long,

The “destruction” of the Berlin Wall in 1989 was at first merely an open gate and guards retreating. Eventually, the barrier was dismantled and bits of it are on display in various museums and tourist spots.

The gate opening was actually a mistake at the time. The Cold War’s so-called Iron Curtain, which prime physical symbol was the wall, had started crumbling in other countries. An East German Politburo member, Günter Schabowski, mistakenly announced that East Germans would be allowed to travel into the West effective immediately. Crowds started to form at the Bornholmer Strasse checkpoint. Then, a border guard, Harald Jaeger, told his men to stand down and let the 20,000 people now assembled to pass through.

As Jaeger commented recently, that East Germans started running West in euphoria. He himself has marveled that the fall of the Berlin Wall “happened without weapons and violence.” Jaeger also pointed out that no blood was spilled that night, “only tears of joy and a bit of cold sweat running down my back.”

During its 28-year existence, the wall was an iconic backdrop for numerous occasions and politicians. Several U.S. presidents appeared there. President John F. Kennedy visited in the summer of 1963, not long before his assassination. He declared, “Ich bin ein Berliner” in a electrifying speech about the divisions between the Communist and non-Communist world. In June 1987, President Ronald Reagan challenged then Soviet Union leader Mikhail Gorbachev to “Tear down this wall” during a speech near the wall.

Today, visitors in Berlin took pictures in front of the graffiti-covered Wall remnants. Artists tethered more than 7,000 illuminated white balloons along more than nine miles of the path where the structure once existed. They will be released on Sunday during 25th anniversary festivities. Gorbachev, whose “glasnost” and “perestroika” reforms led toward the Cold War’s end and the fall of the Wall, is expected to be one many former political leaders attending the celebration. There will be one million partyers, fireworks and a rock concert expected on Sunday at the 25-year anniversary celebration of the Berlin Wall falling (or at least opening wide) on Nov. 9, 1989.