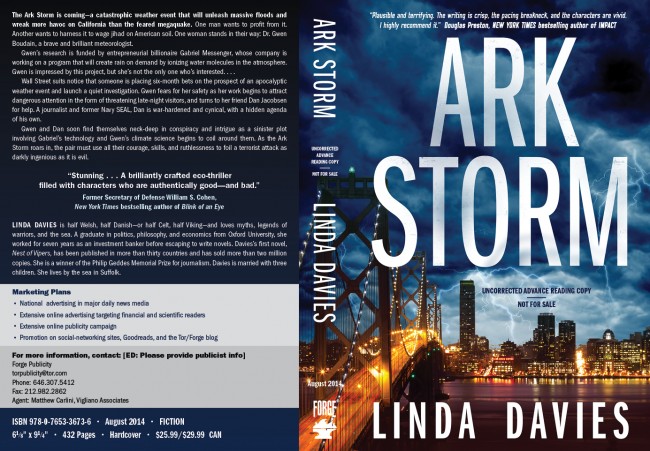 What does the world of high finance have to do with extreme weather events? It turns out, a lot, and talented thriller author Linda Davies writes about the relationship very convincingly in her latest cautionary novel, Ark Storm (Tor/Forge). Ark Storm is a fast-paced thrill ride that will take readers on an enjoyable, suspense-filled ride that they will not want to put down until the very end.

Dr. Gwen Boudain is the main female protagonist in this techno-thriller. She has been collecting weather and oceanic temperature data for years, and believes that she can tell by her data when a major weather event will occur, such as heavy rains, major flooding, and other El Nino-related events. Her information proves to be a very important and valuable commodity, one which becomes funded by entrepreneurial billionaire Gabriel Messenger.

Ark Storm is composed of 154 short chapters. Each chapter is set in a different location and each one has a different point of view. Gwen’s knowledge of how to predict weather patterns has many potentially beneficial application. However, her knowledge,  in the hands of terrorists, could prove to have many disastrous results.

Ark Storms, or, more accurately, ARk storms, are very real events, and have produced catastrophic weather results in the past.  An ARk storm is an Atmosperic River Storm.  In the novel, Dr. Gwen Boudain describes what an ARk storm is like to Gabriel Messenger by saying “It’s been described as Hurricane Katrina pushed through a keyhole.”

After describing what a storm like that was like to Messenger, she said what the last one that hit California was like “in eighteen sixty-one to eighteen sixty-two. Witnesses describe a flying wall of water that swept people and livestock to their deaths. California’s Central Valley — America’s breadbasket, incidentally — was turned into an inland sea for months.” The rain fell for forty five days. The state of California was bankrupted when the the San Joaquin and Sacremento Valleys were turned into an inland sea.

An ARk storm, in other words, is a bad mammer jammer. Gabriel finds himself intrigued by Gwen’s words, and funds her research. His company is also working on weather, with the goal of creating a program that can ionize water molecules, enabling rain to fall wherever it is needed. There is, though, another person who is very interested in Boudain’s research and findings, and he wants to harness the power and fury of being able to create an ARk storm in order to wage Jihad on American soil.

At her website, Linda Davies talks about when she first became interested in the El Nino, or Christ Child, whether phenomenon, called that because it often happens around Christmastime, when Christ is said to have been born.  When she lived in Peru, the author found out from a fisherman there that when the ocean’s water temperature got unusually warm for that time of the year, the local fishermen knew that El Nino had come, far in advance of the world’s media.

That got Davies thinking about the huge amounts of money that a person could make if he/she had a superior method to predict the weather.  She writes that the Moche civilization in Peru even offered up hundreds of heir own people as sacrifices in the past to try to appease the weather gods in El Nino years. She has done a lot of research for this novel, to make it seem very plausible as one reads it, and that makes the book seem very realistic and frightening to contemplate what might happen if what she writes about ever comes to pass in today’s world.

The probability that another ARk storm could hit California rises with each passing year, as one usually happens every one to two hundred years. Davies writes at her website that there could be walls of water ten feet high, that the rain could fall in feet instead of inches, and the flooding could effect millions of homes. The storm would not be over in a day, but would last for over a month. Possibly 1.5 million people would be forced to evacuate their homes and the cost could be around $725 billion, or three times higher than the cost of a “Shake-Out Earthquake” happening in California.

Ark Storm is a fascinating thriller by Linda Davies that will have readers staying up late into the night reading it. The technology of ionizing water molecules is already being used in places like Dubai, and the technology keeps on improving every year. These ionizers can even be set up into the air on drones. Ark Storm is an adrenaline-fueled read that anyone who loves to read thrillers based on science will enjoy checking out.