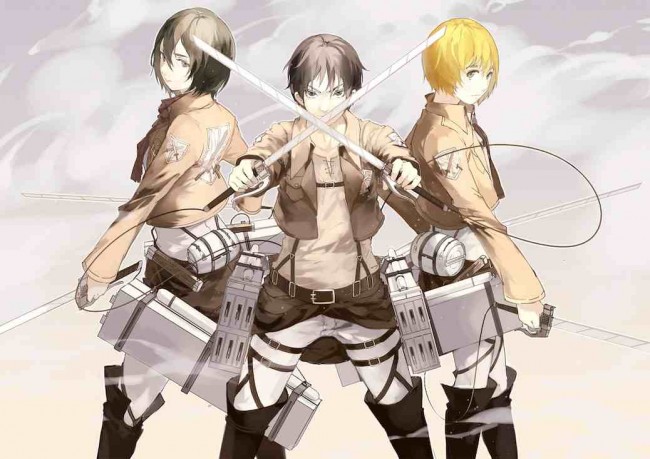 The Attack on Titan franchise is a worldwide phenomenon which has spread like wildfire and shows no signs of slowing down in terms of fan popularity, but there have been signs of slowing down in terms of production. It may or may not be the case, but because of the extreme lack of information coming out of official sources that eager Otaku are being buffeted by rumor after rumor, many of which turn out to be hoaxes or disappointing teases. A lot of the speculation and rumors surround the mysterious Season two of the Attack on Titan anime, which continues to see reported release dates delayed despite what would appear to be sufficient storyline in the manga, though one rumor that appears to be true is an upcoming crossover with Marvel Comics.

The crossover was teased on Twitter by Marvel talent scout CB Cebulski, saying that it would be out in a couple of weeks and teasing some of the art. Based on the tease, the crossover will feature the titans going up against Spider-Man, though the language suggests that the release may only be for Japanese audiences. If that is the case, however, it seems unlikely that Otaku nation will let that slide. American demand for the crossover may well convince the creators to expand the release, if plans are not already underway to do so. As excited as some fans are about the new crossover project with Marvel, it has not distracted them from the multiple delays and changes in the release date for Season two of Attack on Titan at all.

In reality, the fact that there has been no official confirmation of anything, with Wit Studios and Kodansha Comics keeping silent as well as manga creator Hajime Isayama, makes a release any time before mid 2105 highly unlikely. The prequel Original Video Animation (OVA) project being released in two parts is scheduled to have its first volume drop on December 9, with the second following possibly on April 9, though that date is unconfirmed and may be as late as August. This has led to purely unsubstantiated rumors that the second season of the anime would be releasing right afterwards on April 15. The available evidence, however, makes this an unlikely prospect. While it seems likely that Attack on Titan will see a second season in 2015, but the work being done on the prequel release and the complete lack of confirmation of work being done on the anime, means that the only way that timetable is realistic would be if there had already been significant work done on the series without actually allowing anything to leak in order to create a massive surprise event. It makes for great rumors and speculation, but is not extremely realistic.

There are things on the table for Attack on Titan fans to sink their teeth into as they bide their time until the second season of the anime arrives. The upcoming Marvel crossover will be big if they allow it to be, depending on the decision about an American release. The prequel OVA is promising as long as there is not too much of a lag time left between its release and the release of the anime. The two-part live-action film will also help to sate some of the appetite for the franchise. It is a fine line, however, that is being walked with the Otaku faithful. Teasing and generating anticipation is one thing, but dragging things out until the constant frustration surrounding secrecy, rumors and wrong dates may eventually cause Attack on Titan to become synonymous with delays and disappointment. It has not reached that point yet, but the fans are waiting and watching to see something spectacular to make it all worthwhile.

‘Attack on Titan’ to See Marvel Crossover Comic but Season 2 Delayed added by Jim Malone on November 9, 2014
View all posts by Jim Malone →