By Rebecca Savastio on November 25, 20147 Comments 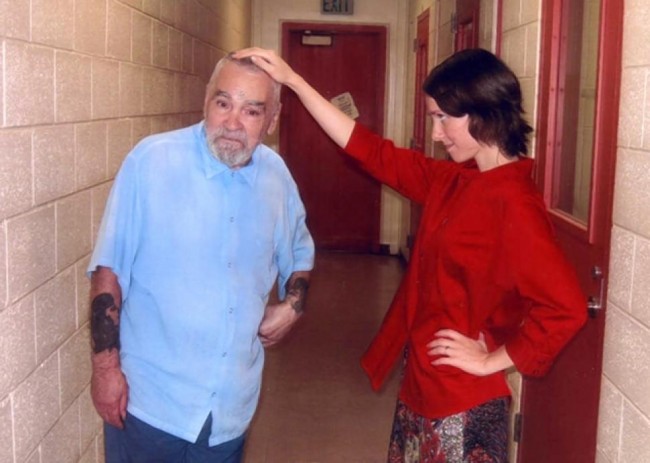 By now everyone has heard the shocking news that 80-year-old mass killer Charles Manson has been granted a marriage license and is engaged to a 26-year-old woman who calls herself Star. Big hugs to all the single people out there that are going to have to explain why they are single and a serial killer is engaged at the dinner table this Thanksgiving. It seems that the pair has a star-crossed romance. Here is a little bit of history and an inner look at the private lives of these lovebirds.

Star, previously known as Afton Burton, first became interested in Manson when she was only 19 years old. She had read his environmental philosophy known as ATWA, which stands for air, trees, water and animals which, he explains in his book, is the life of the planet. For several years the two lovebirds exchanged lengthy emails and talked on the phone; about what, one can only imagine. Star claims that they are one person, made for each other. She even moved at 19 to be closer to the prison where Manson resides.

Star’s number one belief to making a relationship last is that the couple needs to be close together. A couple will definitely struggle in their romance if they live thousands of miles apart.  However, this may seem odd advice considering that one of the people in this relationship is spending his life in prison, and therefore the furthest away he will be moving is to another cell, but it is still advice they are putting out there. As previously stated, Star moved closer to Manson so that she could spend a total of five hours with him during weekend visits.

To keep their star-crossed romance humming along, Star supports Manson by running all of his environmental websites for him. What could be more exciting than doing all of the work for an incarcerated spouse? Apparently this is one way to put a spark in their relationship.

Manson and Star do not put sex first in their romance. In fact, they cannot. According to the two, sex is not that important anyway, and it gets in the way of other important aspects of their relationship.  This tidbit of advice actually makes sense for the two, considering Manson will be 92 the next time he is eligible for parole and they will likely never consummate their marriage. According to the couple, they are lucky because sexual contact has never been, and probably never will be, an issue to impair their judgment and get in the way of more important things. Star and Mason are only allowed a kiss at the beginning and end of each prison visit.

In the midst of this whole cluster of crazy, Manson’s future mother-in-law, 48 year old Melissa Burton of Bunker Hill, has stated that she, shockingly is not happy about the romance and marriage. It is safe to assume that no mother longs and wishes for the day her 19 year old child will fall in love with a mass murderer condemned to a prison cell for life. Surely people are wondering what the holiday get-togethers are going to look like in the future.

Charles Manson and Star’s star-crossed romance may rub some people the wrong way. Many family members of Manson’s victims have come forward stating their, understandably, strong disapproval of the union. Many claim it is making a mockery of not only marriage but the justice system as well that a man this sick is able to get married. Whatever the case, many have reached out to support the victim’s family during this time.