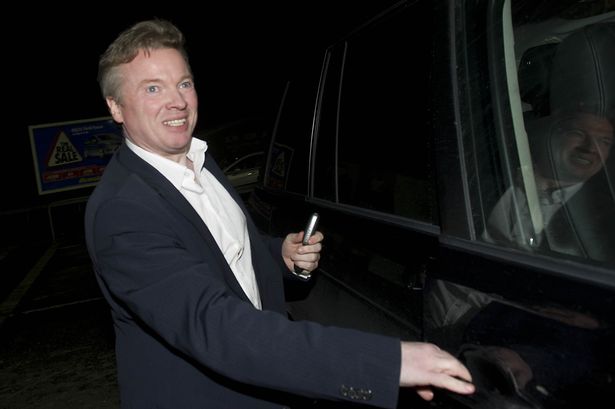 Craig Whyte, former Rangers owner, was detained by police in Mexico, flown to Heathrow Airport in London on Thursday, and then released on bail Friday from Glasgow Sheriff Court. The 43-year-old was arrested by Scottish police at Heathrow Airport Thursday afternoon. He was charged with being involved in fraudulent activities under the Companies Act 2006.

He appeared before the court on Friday to face the charges. He did not enter a plea or made any declaration at that time. Sheriff Andrew Normand granted him a conditional bail after a 45 minute private hearing and judicial examination, requiring him to surrender his passport.

Outside, a chaotic scene developed as he was escorted from the building by police. Whyte, in a goatee beard and slicked back hair, provided no comments as police guided him through the large crowd of reporters and demonstrators. Upset fans turned up and hurled insults at him as he departed in a waiting car.

Craig Whyte purchased the Rangers from Sir David Murray back in 2011. One year later, Whyte placed the club in administration. Several months after that, the Oldco Rangers were liquidated and Whyte banned for life from involvement with Scottish football.

It was reported he allegedly funded a controlling share of the Rangers by selling off-season tickets after posturing to Sir Murray that he had the cash of his own to purchase controlling shareholding in the club. This reportedly duped the board in agreeing to the sale of the club. He allegedly failed to pay outstanding VAT and National Insurance payments plunging the club into administration.

He is also accused of pretending that he would provide the funds to purchase players and that he would shoulder the tax liability. Other allegations include that he was part of a Ticketus claim that Sir David Murray knew the purchase was being made with the sales of the off-season tickets.

Whyte is further alleged to have pretended to the SFA that he was qualified and never disqualified from being a director giving them the assumption that he was fit to lead and take control of the club. The charges end with Whyte allegedly acquiring the shareholding of the club by fraud and that he neglected to pay what was needed for continued operation of the club.

Whyte’s attorney confirmed that bail had been granted his client by Sheriff Andrew Normand. No follow-up court date had been set. Craig Whyte was in Mexico when he was detained and flown to London before being granted a conditional bail release in return for his passport.

Sky Sports News reported that the former Rangers owner was not going to duck his responsibilities and would cooperate with authorities in their investigation. There were two warrants issued for Whyte. The first warrant was issued from the Crown Office and Procurator Fiscal Service and the second issued by the High Court in London when he missed four hearings in relation to unpaid debt to the finance firm Ticketus.

In court already were four other men with related charges. David Grier, Gary Whitney, David Whitehouse, and Paul Clark faced the judge for the charge of fraudulent activity. The men were also released on bail following the hearing at Glasgow.

Grier, Whitehouse, and Clark faced additional allegations of attempting to “pervert the course of justice.” All three were employees of Duff & Phelps, the firm hired to carry out the administration of the club. Whitney worked for Whyte’s law firm, Collyer Bristow, before taking on a position with the Rangers. All four men entered no plea during the hearing and were granted bail pending a future court date. Craig Whyte, after being detained by Mexican authorities, was released and granted bail to face charges of fraudulent activity at a later date.