Dallas Cowboys Running Out of Steam 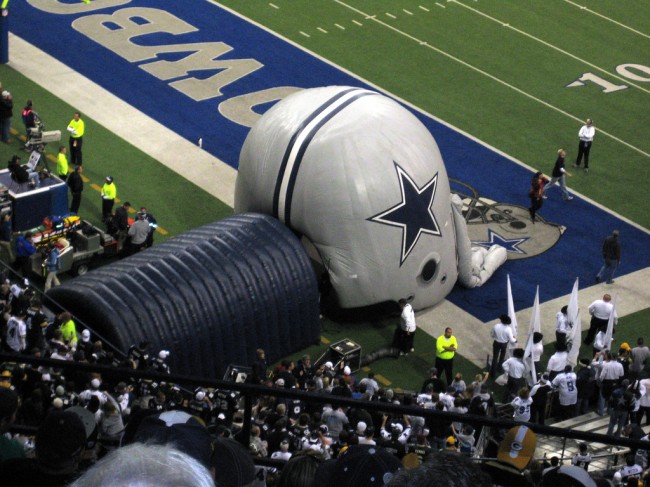 By Thursday’s final score 33-10, it may appear the Dallas Cowboys are running out of steam. Once upon a time they were riding high with a 6-1 record. Fast forward to the final whistle of their Thanksgiving showdown against the Philadelphia Eagles, the Cowboys are sitting on a three-game home losing streak, and looking up to the first-place Eagles in the NFC East.

Dallas built early season momentum behind a balanced offensive attack, along with an opportunist defense. DeMarco Murray was running towards the Dallas Cowboys’ first Most Valuable Player award since 1993 when Emmitt Smith won it. Some considered the Dallas Cowboys the best team in the NFL. However, now that seems eons ago following a stretch that has seen the Cowboys lose three of their last five games.

Their steam began to run out back in a Week 8 loss to the Washington Redskins. Tony Romo suffered two fractured transverse processes in his back after he took a knee in the back from Redskins linebacker Keenan Robinson. Since then it has been a struggle for the Cowboys. They fell to the Arizona Cardinals the following week at AT&T Stadium with Romo sidelined. Murray suffered through his first game of the season without 100 yards.

A trip to London, England appeared to be the cure all for the Cowboys. They easily disposed of the woeful Jacksonville Jaguars, and even got Romo back into the lineup. After a week off they returned to the field against the New York Giants in East Rutherford, N.J. But from the start of the game it was apparent that Dallas just was not quite the same. It took a second half rally and a late fourth quarter touchdown pass from Romo to Dez Bryant to escape the Giants with a win. Still there were not many concerns going into Thursday’s showdown with the Eagles.

All of that changed quickly, as the Eagles scored on drives of 80 and 88 yards to open the game. Just like that all the steam had evaporated out of AT&T Stadium. The Dallas Cowboys were trying to play catch, but never was able to get in arms reach. Murray was held to 73 yards, just the second time he was held to less than 100 yards this season. The defense was gouged by Eagles for 464 yards, 256 on the ground including 159 yards by running back LeSean McCoy. It was more like the Cowboys of old rather than the team many witnessed early on in the season.

This book has been written before. The Cowboys’ cold streaks tend to coincide with the weather around this time of year. A thrashing like they took on Thursday along with their recent losses at home should put panic in them and their supporters. As a result of their loss to the Eagles, the Cowboys now are seventh in the NFC standings, the odd team out of a three-team tie for the two wild card spots in the NFC.

Challenged with their latest rut, the Dallas Cowboys have to figure it out and figure it out fast before they are left behind in the cold. By the sounds of things the Cowboys had no real answers to why it appeared they are running out of steam. A lack of time to prepare for the game; fans not getting loud enough while the defense was on the field; and the receivers not having time to get open thanks to the Eagles relentless pressure on Romo were some of the notable explanations, or excuses, for Thursday’s let down.

Romo quickly put that to rest by saying there were “no excuses” for the way the Cowboys played. He was particular about his own play. Romo threw two interceptions and posted his worst quarterback rating of the season. It appears the blueprint to stopping him has been written. In four losses this season, Romo has been sacked an average of 3.5 times, and for a quarterback with chronic back issues trying to dodge a blitz down after down may become taxing.  Certainly that affected the rest of the offense, especially Murray.

The Eagles held Murray to his worst rushing performance of the season. Philadelphia limited him to 3.7 yards a carry, also a season-low. He is no longer on pace to set the single-season rushing record. Following Thursday’s game he is on pace for 1,902 well short of Eric Dickerson’s record of 2,105 yards set in 1984. In part due to the fact the Cowboys’ offensive line does not look as impressive as it did earlier in the season.

It is all too familiar for Dallas. Crumbling comes around this time. Their December mishaps are well documented. Yes, the calendar still reads November, but with the month change just three days away the Cowboys would be remiss if they did not acknowledge that their recent winter woes are not nested somewhere in their thoughts.

Cornerback Orlando Scandrick admitted that if Dallas is to let another golden opportunity slip away “change is happening.” For the Dallas Cowboys who appear to be running out of steam, they must figured it out how to get back in the saddle sort of speak, or else this will be another December to not remember for them.