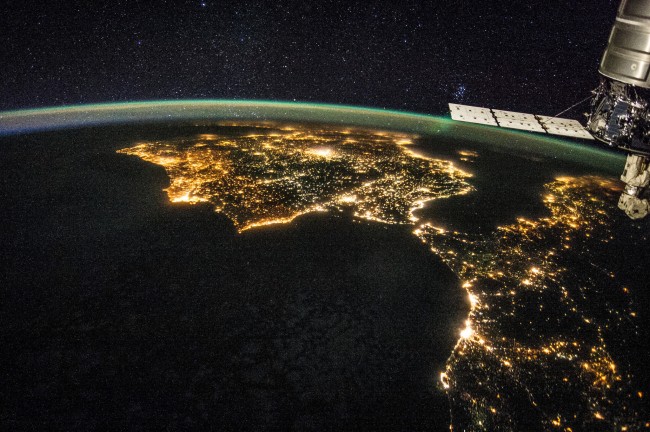 After hours of painstaking scouring, the European Space Agency located the Philae comet lander in its first publicly released photos. The pixelated black and white images illustrate a pockmarked landscape with a tiny white dot analysts believe is the comet probe. Gabriele Bellei, flight dynamics specialist, located the trail of dust and the comet’s shadow after patiently scanning numerous photos.

Technicians believe the Philae landed in the precise location they had predicted, but then bounced two times before settling a few minutes later. The probe, about the size of a washing machine, was not designed to bounce. It was supposed to launch hooks into the surface of the comet to anchor itself after landing, but that part of the system failed to work. Mission manager, Stephan Ulamec confirmed that the European Space Agency knows approximately where the Philae comet lander is located, but cannot specify exactly just yet. While they initially thought the probe landed once, it actually landed three separate times. Ulamec called the multiple touchdowns an “inflation of landings.” Additional analysis will be needed to determine the lander’s definite location.

Launching from the accompanying Rosetta spacecraft, the Philae landed on Comet G7P/Churyumov-Gerasimenko after seven hours of travel. The probe is similar to a science lab with ten different instruments on board to analyze the comets chemical and physical properties. The probe has been traveling since 2004, crossing four billion miles and ten years to reach its destination. The European Space Agency’s Senior Scientific Advisor, Professor Mark McCaughrean said the team was still “hugely happy” with the information the Philae had returned so far.

Andrea Accomazzo, Spacecraft Operations Manager said, “The mission is not over for us.” She says they are planning to continue monitoring the probe and analyzing the data over the “coming days, the coming weeks, the coming months.” After draining its 60 hours of battery power performing initial tests, the Philae settled into sleep mode and stopped emitting signals via the Rosetta satellite. Accomazzo believes their cometary study may expand into the next couple of years or more. Her hope is that years from now the science community is “still talking about this fantastic mission and this fantastic team.”

The probe finally settled about a kilometer away from its intended location. Landing off-target is a definite setback for the mission which was authorized in 1993. The European Space Agency says the Philae is likely situated in the shadow of a cliff with its solar panels not receiving enough sunlight to allow continued communications. Just before it died completely, scientists were able to reposition its solar panels in hopes of gaining more light. Mission managers are hopeful the comet probe will revive as Comet G7P orbits closer to the sun. Several weeks or months may elapse before the Philae has enough energy to power back on, if it ever does. For now, the Rosetta spacecraft will continue its trek through space alongside the comet, waiting to hear something from the lander. The European Space Agency research team will get some much-needed rest, before trying again to find an exact location for the Philae comet lander.