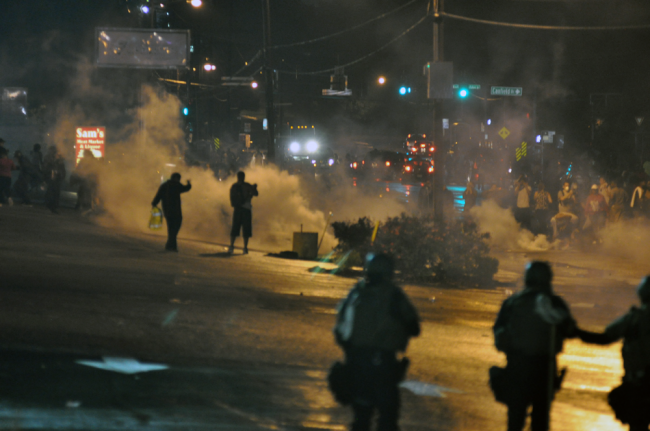 The verdict in the case of a white police officer convicted of shooting a black teenager in Ferguson, Missouri in August of year, expected in the next few days, is provoking racial tensions not only in that city, but others as well. Some are tense because they are worried that they may become casualties of something that they had no part in. Others are  just plain disgusted to be the victims of what they see as a corrupt justice system. The family of Michael Brown, the teen killed by Ferguson police officer Darren Wilson, called for peace and calm, as did authorities and activists as the jury that is designated for this case comes closer to a verdict. A full complement of law enforcement agencies are on hand to lend support in case things got out of hand, including the FBI.

Such a display of force has been deemed necessary after a demonstration of on a grand scale in August turned riotous. Months of protests followed the shooting in Ferguson over what protesters say is a race-based system of unequal justice. Many say that police tactics must change, provoking racially charged tensions to a new high as people everywhere wait for the verdict to be handed down. President Obama has asked that people keep their protests peaceful, going on to say that people who used such events to promote violence is in violation of what being an American is all about. The Department of Justice says that it is asking enforcers of the law to engage communities in helping to avoid unnecessary clashes. They state that it is of the utmost importance for local law agencies to plan and prepare within their communities for such situations.

There has been a deal reached between Ferguson County and heads of state, known as rules of engagement, that has been put in place with around 50 groups of demonstrators. It is hoped that this will avert any violence that may erupt with the reading of the verdict for Darren Wilson. As well, the American Civil Liberties Union of Missouri claimed to have procured three court orders signed by a U.S. District Judge that grants the rights of the public to film police. Protest groups had complained that law enforcement agencies had been hampering citizens from recording their actions during demonstrations. Such actions have potentially been provoking the rise in racial tensions as most of the population in Ferguson is already on edge while waiting for the verdict to be made public.

Michael Brown, Sr., the father of the deceased teen, has put out his own call for peace and calm. In a video statement released on YouTube he speaks eloquently and calmly as he implores people to act rationally and peaceably no matter what. He goes on to say that he does not want his son’s death to become meaningless and provoke more violence. He wants Ferguson to move forward and make itself into a better place, a region where racial tensions are not the norm. He advocates for demonstrators to act peacefully and non-violent. Michael Brown, Sr. does not want his son to become a symbol for all that is wrong with the justice system, but rather be remembered as just a boy who is his son.