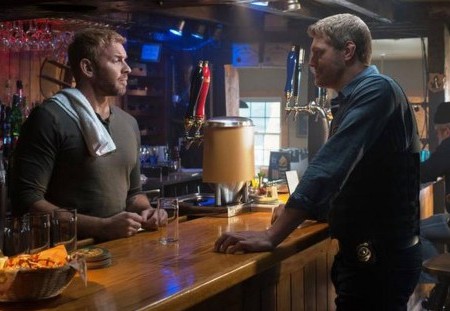 In Haven this week Chemistry gives viewers the tears of a Duke, who foolishly fell for the drivel that Mara was spouting. It certainly came as no surprise to anyone else that the evil side of Audrey Parker was lying like a cheap watch in the prior episodes. Crocker fell for her hook, line and sinker in terms of the heart and when the two made a little whoopie, Duke was completely taken in. The guy may be a bit of a hard case when needs must, but inside that tough exterior beats the heart of a romantic kid whose mother deserted then propositioned him.

It seems that Mara is not the only tricky female hanging around Haven at the moment. Charlotte Cross has managed to skillfully wrap Police Chief Dwight Hendrickson around her sexy little finger. Just like the bad part of Parker, Cross sealed the deal with a little rumpy pumpy in the medical storage room. Ironically, when Cross is “outed” later in the show she calls Audrey clever. Considering that the savior of Haven has always been pretty straight forward, this is not even a case of the pot calling the kettle black. Mara on the other hand…

Duke Crocker was so besotted by Mara after they had sex that when he took the “panicky” cell phone call, it did not strike him odd when the woman who started all the troubles actually screamed at the other end of the call. This conniving trouble-maker is many things, but a screamer is not one of them. Sort of like Heisenberg, Mara is the one who makes others scream, sort of a deviation on the “one who knocks.” Haven Chemistry has Duke shedding a few black tears, droplets of aether apparently, so Mara has managed to make Duke into a two legged dispensary of the stuff.

Later when Mara sends Duke her toe, the penny finally starts to drop for Crocker who remembers the time he threatened to take one of Audrey’s evil twin’s toes. After Mara reveals that she used everything that Crocker revealed, during their caring and sharing bonding moments before getting up close and personal, against him; the man gets angry enough to cry, and he does, black aether-y tears that look pretty scary.

As Audrey and Vince try to find out who Charlotte Cross really is, the woman who is not from the CDC turns out to have a ring just like the ones that Audrey and Nathan have. Dwight reacts badly when Wuornos and Parker confront the “doctor” and she says that all will be revealed when they return her ring. As Nathan hands the piece of jewelry to the woman, he realizes that he can feel her just like he could Audrey, before she was split from Mara.

Considering that Charlotte has been proven to have been lying since she arrived in Haven, in Chemistry, Hendrickson has chosen to ignore that little fact, amazing what a little time between the sheets will do to a healthy male, case in point being Duke and Mara. Cross drops the bombshell that she is mother to Audrey, and that is one heck of a confession in the penultimate episode before the mid season finale. Audrey is still sick, cell deterioration, and Crocker has become, as Mara says, “awesome.” Haven troubles have gotten amplified and it looks like two women who should not be trusted are going to be big players in the next episode.