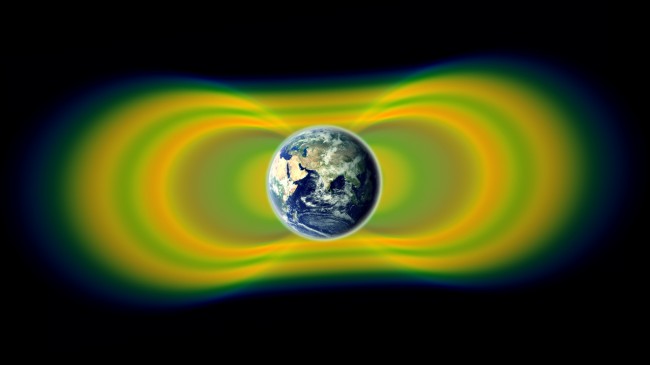 Radiation shields may seem like a plot device confined to the realm of science fiction, but a recently released study in the Nov. 27, 2014 issue of Nature magazine found an impervious barrier in the Van Allen belts that protects the Earth by intercepting ultra-fast electrons. Scientists from the University of Colorado at Boulder (CU-Boulder) discovered the barrier with the help of the Van Allen Probes that allow them to study and measure the region with greater detail and accuracy for the first time. The discovery changes scientific understanding of the workings of the Van Allen belts and the measures needed to protect spacecraft traveling through the area from radiation.

The U.S. Explorer 1 satellite launch in 1958 was the first to discover the twin Van Allen belts, which on occasion becomes three or merges into one. The inner belt usually encompasses an area 400 to 6,000 miles above the surface of the Earth and the outer belt from 8,400 to 36,000 miles in altitutde. The Explorer 3 confirmed the belts existence and Explorere 4, Pioneer 3 and Luna 1  later mapped  the region during their respective missions.

The highly-charged electrons moving at near light speed can be a particular problem for satellites and other nearby space systems traveling through the area only to be bombarded with damaging radition. However, the newest data from the probes shows that there is a reason for the empty space between the two donut-shaped rings of radiation. It contains a force field, called the plasmasphere, at about 7,200 miles altitude, just inside the outer Van Allen belt that impedes the super fast particles’ journey toward Earth, shielding it from the damaging radiation.

The probes responsible for the discovery were launched in August 2012. Scientists were surprised by the revelation of the barrier effect, which turns their understanding of the systems at work in the region on its head. However, the probe allows highly precise and accurate measurements of the high energy electrons to which scientists have never before had access. Its close observations make it possible to refine prior knowledge to gain a greater understand of the forces at work in the Van Allen belts.

The Denver Post reports that the discovery could change radiation protection protocols for spacecraft traveling through the Van Allen belts. Exploratory vehicles, satellites and other equipment typically take extra precautions when navigating through the highly-charged radiation in the area. The belts are drawn together by the Earth’s magnetic field and ebb and flow with the sun’s energy. When they expand, low-orbit Earth satellites can be damaged by the radiation so the close observation can help scientists better understand the flow pattern to make more accurate predictions  about changes which will help them shield the satellites to protect them from damaging radiation.

Lead researcher on the study, director of CU-Boulder’s Laboratory for Atmospheric and Space Physics, Daniel Baker, is intrigued and puzzled by the “glass wall” effect they are seeing in this region of space. He likens it to Star Trek force fields used to repel enemy attacks, protect the ships and confine prisoners. MIT Haystack Observatory’s associate director, John Foster, concurs that the phenomenon is undoubtedly out of the ordinary. However, he adds that the implications are exciting because it reveals a feasible location for a manned space station where the humans would be shielded from radiation and potentially live much longer as they orbit high above the Earth.