‘Haven’ Reflections: Is This a Double Cross? (Review) 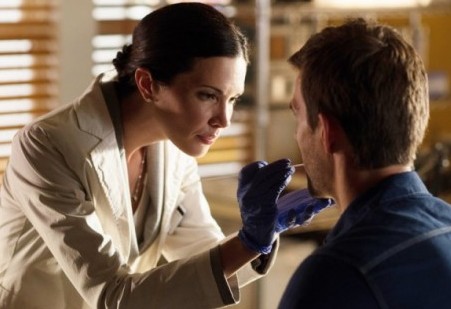 Despite Dwight wanting to believe that the good CDC doctor is who she claims to be in Haven: Reflections it is starting to look like a double cross will soon be affecting Parker and the entire town. Charlotte Cross is up to something, looking at that thick file on Audrey Parker that the doctor pulled out at the end of the episode she obviously knows a lot more about the town and “the troubles” than she has admitted. The woman whom the CDC claim to have never sent to Maine has not yet revealed what she is really after.

While Cross plays her games, Mara continues to work on Duke. She seems to have finally broken down Crocker’s defenses and her plan of making the man feel isolated has borne fruit. Like Dr. Cross, Mara has an agenda that does not include Duke’s well being. He has forgotten just what makes her tick and when the two finally get together in a very steamy (literally) scene, it looks as though the evil side of Parker has gotten just what she wants. She is free and Crocker is now on her team.

The issue of the aether, which Mara is still desperate to get her hands on, is still alive and well. Duke attempts to get the stuff for Mara only to find it missing. Dwight also learns that someone has been in the police chief’s safe and taken the last bit of it. Hendrickson accuses Nathan of taking the aether, or being behind its disappearance. The two men watch the police station’s security footage and see someone else, not Duke, taking the black stuff. Dwight recognises that the man in the cap is a member of the guard and he tells Wuornos that he will track down whoever it is.

In Haven: Reflections, this week the good doctor who may or may not be who she claims to be and certainly looks to be setting up a double cross which will affect the entire town. The medical expert is going through the motions of helping though. Charlotte continues to play the wide eyed innocent in regards to the troubles. This is proven to be a lie when the “Lucy” file is pulled out by the doctor at the end of the episode.

Vince does not trust her and he and Dwight agree to disagree about who she really is. While Mara finally gets Duke to let down his guard, the main plot deals with another trouble that reflects what people are thinking…literally. At the start of Haven a waitress who works in The Half Tart cafe is complaining about her financial situation on the phone. Just after saying that she feels she is falling apart, the woman does. Later in the show a boy who was bullied when he was a “90 pound weakling” loses his hard earned muscles and ends up in the hospital when he returns to that skinny boy.

As Audrey seeks to find out why she is still ill and fix the latest trouble in Haven, Doctor Cross is still a mystery. Duke has given up fighting Mara and she seems to have taken control of him. At the end of Reflections, Haven looks to have double the amount of problems now that Duke has lost his battle with Mara. The aether may have gone missing, but with Crocker under her control and Parker getting sick again, Nathan and Dwight will have their work cut out for them trying to defeat Mara before she can destroy Haven. Dr. Cross appears to be another threat to the town and it certainly looks like a double cross times two is just over the horizon from both Mara and Charlotte. At this rate, the troubles may be the least of Haven’s problems.