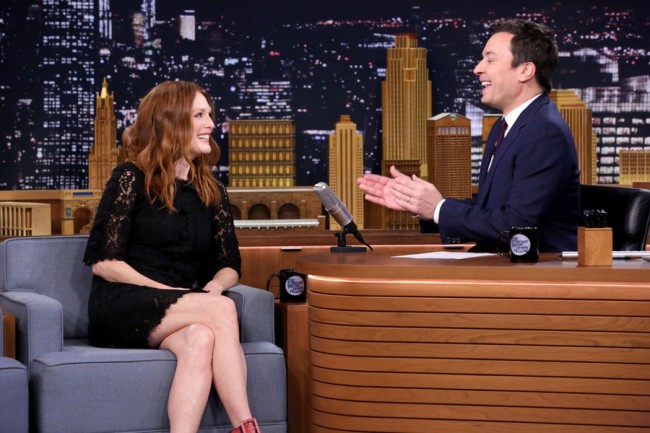 Jimmy Fallon welcomed his audience and then he joked and quipped about people and events in the headlines. Some of the jokes, in a paraphrased form, follow.

“Here’s what everyone’s talking about,” Fallon said. “Senator Tom Colburn predicted that America would go nuts and there would be rioting and acts of civil disobedience. That’s actually next Friday, Black Friday.”

“A lot of Spanish viewers tuned in to President Obama’s speech last night. He did a different version in Spanish. Let’s take a look,” he said. Then, he showed a video clip of an Obama impersonator talking in a mixture of English and Spanish. It was pretty funny. Subtitles were below, when he spoke in Spanish.

“Fox announced that Glee would begin airing its sixth and final season of Glee in January. When asked what it will be about, executives at Fox said ‘We’re not sure — we stopped watching sometime in season three, ourselves.'”

Then, Jimmy Fallon did his weekly Tonight Show Superlatives comedy segment. He showed photos of NFL players on what looked like football cards and joked about what they were voted Most Likely to be or do, like in high school yearbooks. J.D. Walton, of the Giants, “was voted Most Likely to be the Elf on the Liquor shelf,’ for instance.

Another football player he joked about was “Tyler Clutts of the Dallas Cowboys was voted Most Likely to be Nick Carter after he ate the rest of the Backstreet Boys.”

Fallon said “On Monday, something historic will be announced, but I can’t tell you more about that.” Then, Fallon introduced Julianne Moore, from The Hunger Games: Mockingjay Part 1. Also, Michael Cera, from the play “This Is Our Youth,” will be on, and musical guest, Kid Rock.

Jimmy Fallon asked James Posey for some “Thank You Notes” music. “Thank you, President Obama, for announcing your new plan on immigration. It sounds great, though a lot of immigrants seem to still be on the fence.”

“Thank you, woman who plans on marrying Charles Manson, for making Manson look like the non-crazy one in the relationship,” Fallon continued.

“Thank you, SnapChat Logo, for making it look like the Liberty Bell had sex with a ghost.’

“Thank you, tying my shoe on an escalator, for making it the closest I’ll ever be to starring in an action movie,” Fallon said; then, the Tonight Show went to a commercial break.

Fallon asked her how her family was, and who is the good cop and who is the bad cop in her family. she said she is referred to as the President, and her kids call her husband the Coach. “We do a lot of texting. We even do group texting and such,’ Julianne said.

Jimmy showed a funny text from her son, Cal, who was thinking he was talking to his girlfriend. “Can I come see my baby, now?” he texted to Jullianne instead of his girlfriend. They both happened to be on the show, and Fallon asked Cal to introduce himself and his girlfriend.

“Congratulations on the movie, Still Alice, about Alzheimers,” he said. “It’s not the movie we’re talking about, but it’s a great movie.” They then talked about The Hunger Games: Mockingjay Part 1. She told Fallon she plays the president of the opposition.

Jimmy Fallon played a clip from the movie. It looked very intense. “Miss Everdeen, this revolution is about all of us. And, we need a voice.” Fallon said they will be playing the game Catch Phrase after another commercial break, with special guests. 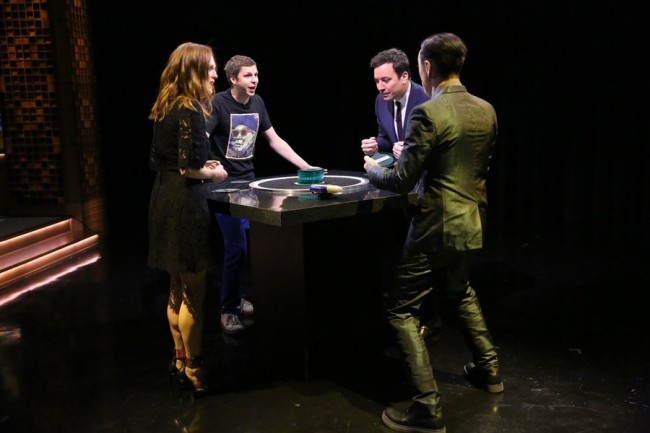 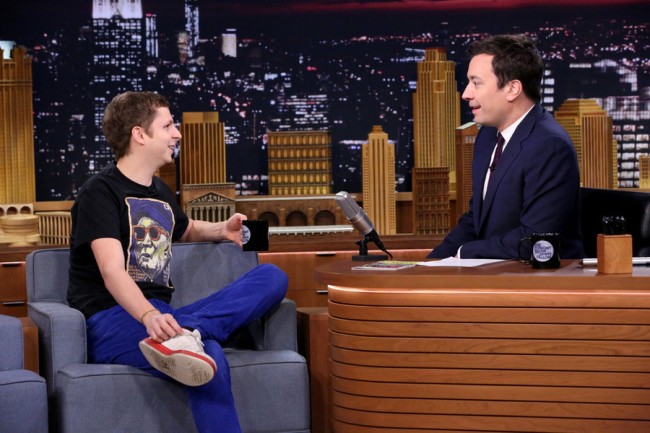 When the show came back, Jimmy Fallon introduced his next guest of the evening, actor Michael Cera. who starred in the TV series Arrested Development and movies like Juno. He is now in the Broadway play, “This Is Our Youth.”

“That was fun,” Michael said about the game.

“It doesn’t mean anything,” Fallon said. His team lost, so he was acting like it was no big deal.

Cera said “You said ‘We’ll play the game, but if you win, it’ll kind of be a weird interview.'”

“I’ll say blue,” Cera told him. Fallon said if Cera looks out his window and see the color blue, it will be a signal to be a guest on the show. Cera asked the audience to “Come tonight,” to see the play, which will only run until January 4.

Everybody in the play is getting good reviews,” Fallon said. They talked about the play more, an Fallon said he was afraid of the animal called “Steppenwolf.” He said “He was a step child, Steppenwolf, he was called.” Fallon did various voices of supposed actors in this supposed play.

“I know you guys get together and bond by playing games,” Fallon said.

“Yeah, and we often play Mario Kart,” Cera said. Jimmy Fallon said “You challenged me to a game of Mario Kart and I said ‘yes.'”

“I grabbed a celery stick and you said ‘Let’s do this, old man.'” Jimmy Fallon said.

Fallon then acted very ticked off and started yelling about how Michael Cera had beaten him in Mario Kart, and then beat him in the game Catch Phrase. He was just kidding around, of course, but it was kind of funny watching him appear to have a total meltdown.

“We had to pull a hunting rifle out of our next guest’s hands to get him to come here and perform a song off of his album, First Kiss, singing Jesus & Bocephus, here’s Kid Rock!” Jimmy Fallon said.

Kid Rock was terrific singing this song — it had a country feel to it. He sang about “Jesus and Bocephus being right at my side.” Maybe he will change his name to “Kid Country.” He has pretty much always had elements of country music in his songs before now, but this one was entirely country — it sounded great. The audience applauded enthusiastically as he finished singing.