International Space Station a Look Inside 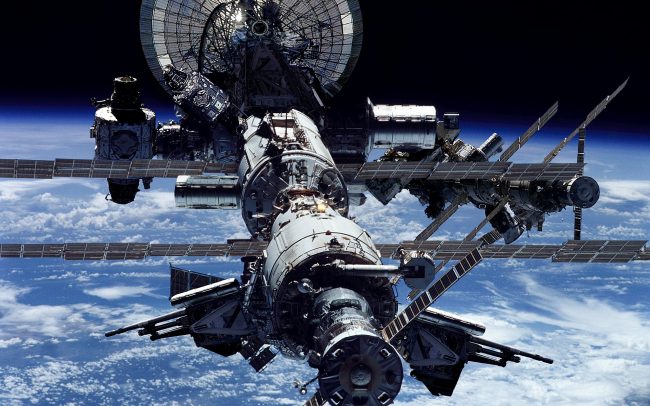 The International Space Station, appropriately named as it was designed and built by a collaboration of space programs from around the globe. Countries such as Japan, Russian, Canada, and select European countries along with the United States made financial contribution and have co ownership of the satellite. The International Space Station spans the length and width of a football field and runs off fifty-two computers that control the stations vast operating systems.

The International Space Station (also known as ISS) is four times the size of the Russian Space Station Mir and five times that of the size of the United States Skylab facility. ISS comes in weighing in at a little over a million pounds and requires eight miles of electrical wiring to run power into it.

The ISS was first launched into space on Oct, 31, 2000 and returned from its inaugural expedition on Nov, 2, 2000. Astronauts and Cosmonauts alike have journeyed to and from the Satellite via a series of Russian space crafts named Soyuz. The Soyuz has been modified since the late 1960’s and continues to launch out of Kazakhstan to the ISS .A Soyuz Vessel is docked on the International Space Station at all times in case of emergency.

The latest modifications have shortened the travel time for Astronauts from a two-day excursion into a short six-hour flight. The Soyuz has been described by American Astronaut Ron Garan as a very small capsule type craft and describes the journey back as a barrel ride over the Niagara Falls. The living conditions for the stations crew are simple. Crew members have relayed insight on their daily activities that follow a regimented routine.

The international space craft orbits at an altitude of 220 miles above the Earth’s atmosphere. At this height crew members experience sixteen sun sets and rises a day. ISS has more functions than just an orbiting laboratory. The vessel allows crew members to conduct multiple experiments, which include gathering data and maintaining routing communication to ground control with updated information.

Both private and academic intuitions also provide research programs in biological, chemical and global environment observation aboard the facility. The ISS crew also investigates the psychological and physical effects on humans while enduring long-term space travel. The celestial craft provides a unique platform for conducting medical and material research.

Observation of the globe will help provide better understanding of environmental effects on agriculture and insight for improving previous methods. Between work members perform maintenance procedures to the interior and exterior of their space home. One procedure in particular known as space walking involves the crew to suit up and remove any space debris from the outer walls and search for any possible damages that may have occurred.

On space station down time, meals are prepared and members to work on personal projects, as well as make time for exercise daily. The meals have been pouched to make it easier for consumption and come in an array of courses. Some foods are powdered and require rehydration to become edible. The packaging also helps keep foods from getting into the equipment and makes clean up easier for the crew.

Further developments in regards to data research are received from the International Space Station, daily. With the use of orbital robotics the expansion of ISS is becoming easier as well as providing a safer method of maintenance for the on board crew. Space programs continue their efforts to provide innovation to technology by using the information and experimental results gathered on the ISS.