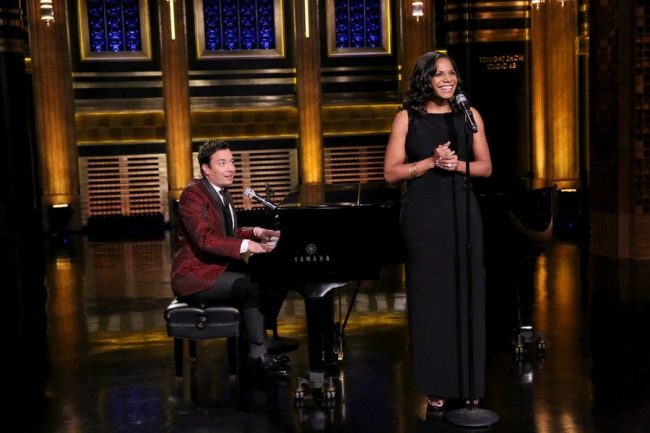 On The Tonight Show Starring Jimmy Fallon, host Jimmy Fallon had on as his guests singer Audra McDonald, who he performed the humorous song Yahoo! Questions and Answers with. Also, Magic Mike actor, Channing Tatum, was on the Tonight Show, and later in the episode, he played the game Box of Lies with Fallon. Another guest on the show was actor Eddie Redmayne, and Fallon’s musical guest was Logic, making for a great Thursday night episode.

After he welcomed his audience, Jimmy Fallon did his nightly monologue, joking about celebrities and other things in the news of the day. Some of the jokes and topics Fallon talked about, somewhat paraphrased, follow.

“Here’s what’s in the news that people are talking about,” he said. “Please take a seat, or if you’re Kim Kardashian, take five or six. And, you thought there was a lot of junk in Sky Mall.”

“The European Space Agency landed a spaceship on a comet today.” Then, he joked about it would have been fun if it had landed on Kim Kardashian’s butt.

“Google’s own robotics company created an enormous robot, Ian, and taught it moves from Karate Kid.  Then, Jimmy Fallon did the same movements in slow motion, making fun of the robot.

“Randy Jackson said he would not be returning to American Idol. He said he wanted to go out on top, but that was seven years ago,”

Jimmy Fallon said “China this week celebrated Singles Day, in which single people go out and buy themselves presents. Or, as we call that in America, Valentine’s Day.”

Jimmy Fallon mentioned that U2 would be on the Tonight Show all week next week, promoting their album Songs of Innocence. He wants people to lip sync the U2 song about Joey Ramone, and upload it to YouTube.

Then, Jimmy Fallon mentioned who would be on the show soon, and he talked about tonight’s guests, like Channing Tatum. He said that Logic would be the musical guest, and Logic’s first album he ever bought was one by the house band, The Roots.

Jimmy Fallon welcomed Tony award winner, Audra McDonald, and sang Yahoo! Questions and Answers, singing about actual questions and answers people wrote online. The first was about how to cure hiccups, the second was “How do I know when boiled eggs are done?” Fallon sang the questions, while Audra sang the answers. The answer involved trying to crack the egg on “your head.”

“What is a person from London called?” Fallon sang the question.

The answer was “My neighbor’s from London, and he’s called Ron.”

“What are some ways to impress a first date? Answer: “What always impressed me was a person who could cross his eyes and sing at the same time, so if you can do both, you’ll get a second date.”

The final one was “Are White Castle hamburgers any good?” The answer Audra sang was “It depends how high you are.” 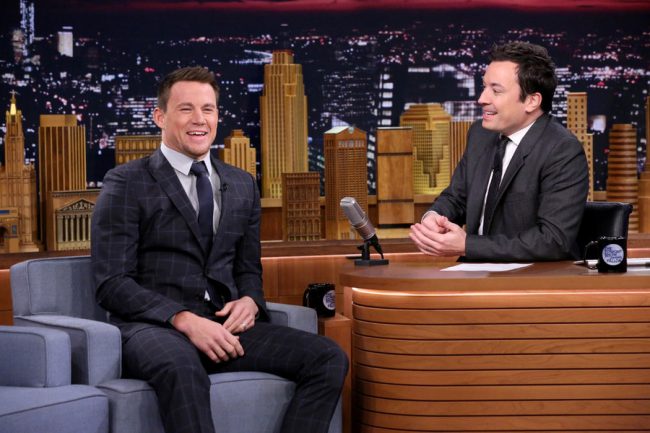 When the Tonight Show came back after a commercial break, Jimmy Fallon introduced his first guest (not counting Audra), Channing Tatum. “Our next guest will be in the movie, Foxcatcher, that opens this Friday. Ladies and gentlemen, please welcome Channing Tatum!”

The last time Tatum was on, he was promoting 22 Jump Street, which he also produced. It made $300 million worldwide. He is also working on an Evel Knievel biopic. “He was so far ahead of his time,” Tatum said.

“Everyone went to see him crash,” Jimmy Fallon said. Fallon talked about how he got his name, running his own security company, and saying he would break into businesses if they did not use his company.

Then, they talked about Tatum’s upcoming flick, Foxcatcher. Fallon said as he watched it, he thought, at times, it was like a documentary. Tatum said he even got a cauliflower ear while wrestling in the movie. “It will be with me my whole life,” he said.

They also talked about Steve Carrell’s character, John du Pont, who is quite dark in the movie, and plays a wrestling coach and a person who becomes a convicted killer. He wants to be “Mark’s” (Channing Tatum’s) wrestling coach.

“I wanted to challenge your acting skills live on this show,” Fallon said, so he challenged Tatum to a game of Box of Lies. Channing accepted, and they will play right after another break.

Jimmy Fallon explained the rules, about how there were boxes that contained objects, and a person could either tell the truth or be lying about what is in the box.

Channing went first, and inside of his box was Jello in a bowl. “Do you know what’s in my box?” he asked.

“This isn’t the time to plug your website,” Fallon said.

“What is in my box is — a bowl of chili frozen in gelatin.”

“You can’t freeze gelatin,” Fallon said. He said that Tatum was lying, which he was; so, Fallon got the first point.

Fallon went next, and Tatum asked “What was in your box?”

“What is in my box is — it’s a sugar cube attached to a thread, like a tea bag thread,” Fallon said, “connected to a sugar cube, and there’s a Lipton tag on it.”

“What’s it say on the sticker?”

“Lick me or legalize it,” Fallon said. Tatum guessed it was a lie, which it was; so, Tatum got a point.

“You lie!” Fallon said, but Tatum was telling the truth, so he got another point and was declared the winner of the game. The Tonight Show Starring Jimmy Fallon went to another commercial break.

After the Tonight Show came back, Jimmy Fallon then introduced actor Eddie Redmayne, the second guest of the show. My next guest is starring as Stephen Hawking in The Theory of Everything, ladies and gentlemen, Eddie Redmayne!”

Jimmy asked him about having worked with Channing Tatum previously and Eddie said that was true. He said that there were loads of women on the set, also, trying to get a glimpse of Channing.

“This performance is unbelievable, it’s insane how you can transform into Stephen Hawking!” He was asked if he “got to meet Stephen,” and he said that he did, but it took a long moment for Hawking to respond to him. He tried to tell Redmayne he was born in January, so “we’re both Capricorns.”

He said that Hawking typed out “I’m an astronomer, not an astrologer.” Jimmy Fallon showed a video clip from the movie, then the Tonight Show went to another commercial break. 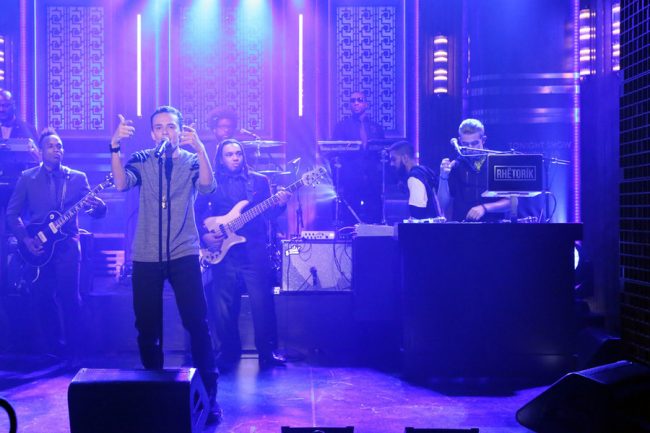 When the show returned, Jimmy Fallon introduced his musical guest, Logic. He played a song from his album, Under Pressure, called I’m Gone. Logic rapped the lyrics uber-fast. He was reminiscent of Slim Shady, himself, Eminem. Logic gave an incredible performance! He mentioned Dr. Dre and Justin Timberlake in the song, and did lots of “hashtags” even. The album is “in stores right now,” according to Jimmy Fallon.

The Tonight Show Starring Jimmy Fallon was terrific, as usual, this Hump Day. Channing Tatum talked with Jimmy Fallon about his latest movie, Foxcatcher, and played the game Box of Lies with him. Check out the video of it, below! Fallon also sang at the start of the show the questions while Audra McDonald sang the answers in a comedy bit called Yahoo! Questions and Answers. Eddie Redmayne was his second guest. Eddie is great as Stephen Hawking in The Theory of Everything. Rapper Logic concluded the episode with a pretty cool rap song, I’m Gone.