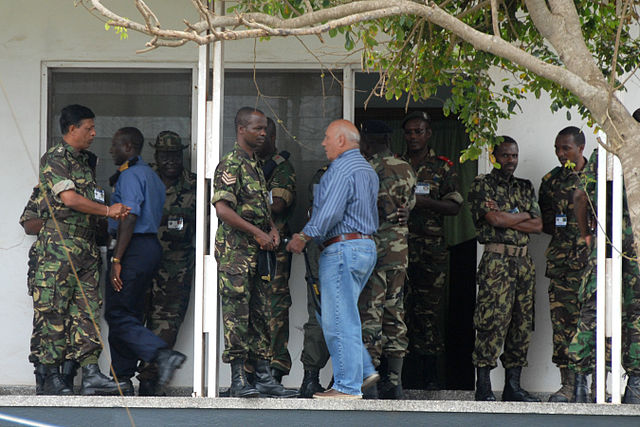 Kenya suffered from a terror attack as Al-Shabab, a terrorist militant from neighboring Somalia, attacked a bus bound for Nairobi, the country’s capital city, causing suffering to the passengers and killing 28 of them Saturday morning. Seventeen of the passengers were teachers while the rest were healthcare workers and police officers. There was a total of 60 passengers. The terrorists asked the passengers to recite Quran verses. Those who did were spared.

The terrorists ambushed the bus in Mandera, a town located near the border of Somalia and Ethiopia. A survivor who did not wish to be named said the attackers spoke both Swahili and in English. After the massacre, they shot wildly in the air in jubilation.

Al-Shabab claimed responsibility for the attack through its spokesman Ali Mohamud Rage. Speaking through the group’s radio station, he said that the attack was in retaliation for the death of a man who died when police searched for weapons in four mosques in Mombasa early this week. The police also arrested 376 suspected Al Shabab militants during the operation.

Mandera County police Commander Noah Mwivanda told the Daily Nation that the bus driver noticed armed men standing beside the road at Omar Jillo village. He did not stop when they waved at him to do so. He instead sped off, only to find three other heavily armed men standing in the middle of the road, pointing their bazookas at the bus. He stopped to avoid provoking the militants into shelling the bus and killing all on board.

Following the terror attack by Al Shabab on a Kenyan bus when they caused suffering and killed 28 passengers, Mwivanda said the police were planning to question the company that owned the bus to explain why a high number of non-Muslims were booked on the bus. He said the location at which the bus was attacked was suspicious. He added that members of the police force were pursuing the attackers, who are believed to have gone to Somali on foot.

Police said the 28 bodies will be flown to Nairobi, the capital city where the bus was bound for. The government has already provided an airplane to ferry the bodies.

Governor Ali Roba of Mandera County is reported to have warned the government of the impending entry of Al-Shabab militants before it happened. He told the Daily Nation on November 8 that Al Shabab militants were planning to enter in to the County from Somalia. He accused the police force of downplaying the threat posed by Al-Shabab.

Raila Odinga, Kenya’s former prime minister, condemned the attack. He asked the government to overhaul the country’s security systems that have been unable to stem the rising level of insecurity. He was addressing the press at Sentrim Lodege, in Nakuru county. He asked the president to reshuffle the police officers and find the root cause of the lack of security.

Police say Al-Shabab has staged 135 attacks in Kenya since the country’s defense forces entered Somalia as part of the African Union team to help protect the fragile Somali government. The group claimed responsibility for last year’s attack at the upscale Westgate Mall where 67 people were killed.

The International Crisis Group released a report marking the anniversary of the Westgate Mall attack in September where it indicated that Al Shabab will continue to disrupt life in Kenya in response to claims that muslims were being marginalized and discriminated upon. Today’s terror attack, which brought death and suffering to 28 Kenyans when Al- Shabab militants attacked a Nairobi-bound bus, indicates that the group’s assessment of the security situation in Kenya was accurate.