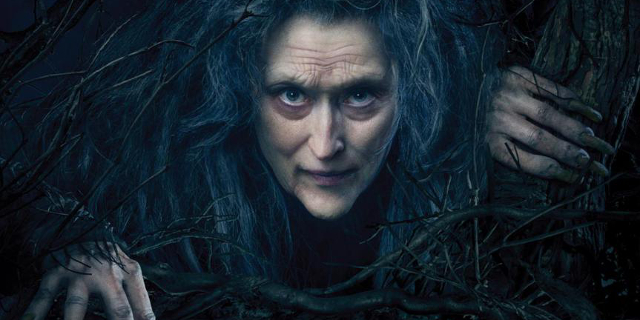 Into the Woods is becoming one of the most anticipated new movies of the holiday season as various trailers and featurettes have gradually been released, but the most recent update of exclusive footage is from Playbill, showcasing the film’s leading lady Meryl Streep giving chills to viewers all over the internet. The video features Streep as the haggard witch singing the emotional ballad “Stay With Me” to her daughter, Rapunzel, played by Broadway actress Mackenzie Mauzy.

Legendary composer Stephen Sondheim is responsible for the enchanting music of Into the Woods and Streep speaks highly of him in the brief interviews that precede the clip of the actress singing from the film. The actress praises the composer for his wit, humor, intelligence and the daring his music possesses, stating there is no other like him. The composer, in turn, compliments Streep for her ability to find colors and other works of art within lyrics that have not been found before. Referring to the actress as “remarkable”, Sondheim proved to tell in his interview that the star would do a number of takes when recording the film’s soundtrack and each one she did was positively different in some way.

The song the clip showcases is an emotional highpoint in the story of Into the Woods. The original writer of the book for the musical, James Lapine states that “Stay With Me” is the song that touches him the most out of the entire score. His reasoning for this is due to the fact that audiences get to see the Witch, who has been such an abrasive character up until this point, reveal herself in a more vulnerable state, which allows them to relate and connect with her more. The whole concept of the song is the struggle of a parent not wanting to let go of their child and wanting to protect them from the ways of the world – an immensely common topic that affects anyone who has shared a parent/child relationship.

Into the Woods is, of course, high fantasy musicality, but the subject matter could not be more grounded. The loss of childhood and the transformation into the harshness of adulthood is a huge theme throughout the production, among many other familiarities of life. Truly a powerful work of art, Into the Woods stands as much more than a fluffy fairytale musical. The likes of a performer so acclaimed and seasoned as Streep would not sign on to a project of anything less.

Streep has been seen as a singer on screen multiple times before in films such as Postcards from the Edge and Mamma Mia!, but Into the Woods will showcase the actress’s classical vocal technique in a way that has not necessarily been heard by her mainstream audience. The “Stay With Me” clip demonstrates the actress’s incredibly strong vocals, belting high register notes flawlessly. The actress backs her vocal technique up with a weapons-grade level of emotions that range from fear to anger to sadness all within a minute’s worth a footage – a truly remarkable feat. This performance could very well earn the actress yet another Oscar nomination if not a win, come time for awards season.

One can watch Meryl Streep giving chills to viewers in the new exclusive Into the Woods footage on playbill.com, found in the sources below. Into the Woods hits theaters nationwide on Christmas Day.