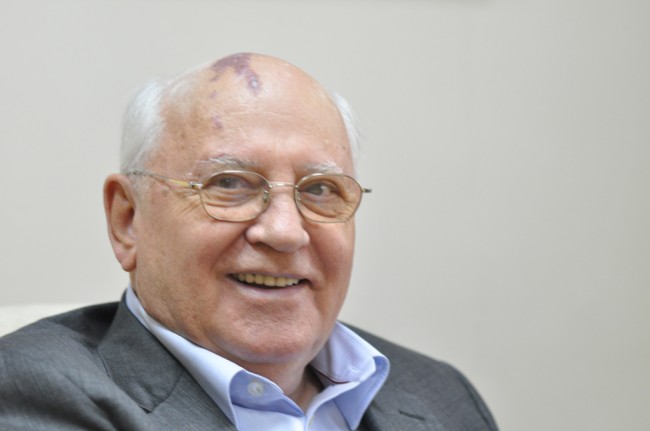 Mikhail Gorbachev has asked the leaders to use more control in regards to the situation between the United States (U.S.) and Russia to avoid another ‘Cold War.’ Gorbachev, who is now 83 years old, is the former Soviet leader whose glasnost and perestroika policies were revolutionary and played a major role in the fall of communism in both Soviet Union and eastern Europe in the 1980s. These reforms called for a policy of open communication, which he is now advocating as a response for the growing tensions between the two countries.

According to sources, the warning was delivered in Berlin at an event commemorating the 25 year anniversary of the Berlin Wall falling. In addition to the warning, Gorbachev also stated that he believed neither nation had fulfilled their agreements after the end of the Cold War and said that the U.S. was guilty of “triumphalism,” abusing Russia’s weakened state after the fall of the Soviet Union and using the lack of a counterbalance to claim “monopoly leadership” across the globe. He said that the past few months events are the results of “short-sighted policies” that seek to force one will and ignore the partner’s interests.

Gorbachev’s request of the leaders to use more control to avoid another Cold War were delivered as the coffins of five more victims of the MH17 crash were flown back to the Netherlands out of Ukraine. The Dutch foreign minister, Bert Koenders, forewarned that the bodies of the final nine victims of the plane crash might not ever be recovered due to the high level of conflict in the region. The plane was shot down in July over east Ukraine. All 298 people flying on the Malaysia Airline’s plane were killed. Currently, 289 of the victims have been identified by Dutch investigators who have made four trips to the site following a ceasefire that was signed between government forces and the rebels in September, according to Ukrainian officials.

There is disagreement over the cause of the crash. The west and Ukraine are saying that rebels shot the plane down using a surface-to-air missile given to them by Russia, however, Moscow denies this and is blaming Kiev. These conflicting claims come at the same time as reports of Ukrainian and rebel forces engaging despite the cease-fire agreement. Ukrainian officials have also stated that it is believed that Russia has been supplying weaponry as well as manpower to the rebel forces.

In addition to asking the leaders of both nations to use more control to avoid a second Cold War, Gorbachev also requested that the West remove the sanctions it has imposed against officials in Russia. According to sources he said that continued destabilization of Europe could make it “irrelevant” in the international realm and that it was becoming an area of competition, military conflict and political upheaval. In comments on Friday, President Obama appeared to have similar concerns regarding the levels of conflict present in Europe, however, he turned the blame on Russia saying that their actions in respect to Ukraine reminded us that there is more work to be done to create a peaceful and free Europe.