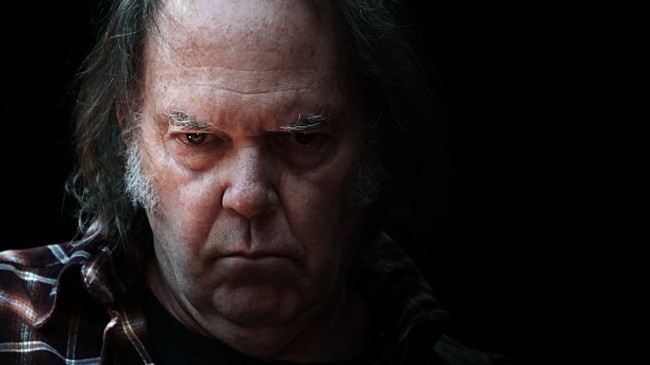 When it was announced that Neil Young would return with an intriguing new orchestral record this year, it shocked many fans. They were not taken aback because of the record, however, but rather by Young’s intense commitment to his work, this year especially. Earlier this year the folk legend released a record produced by Jack White at Third Man Records, successfully over-funded a Kickstarter campaign for his new PONO devices, put out his second self-penned novel, actively protested with Willie Nelson against the Keystone XL Pipeline, and so much more. He is a busy guy.

Storytone is his new record, available today, Nov. 4. The reason the record is intriguing is because of how Young elected to lay down his ten new songs. Instead of going into the studio with Crazy Horse or by himself, the musician decided to have a 90-piece orchestra accompany the record, along with a smaller, more traditional band, and a big band as well. The result is extraordinary, marking Young’s most important release since 2012’s Psychedelic Pill.

The first track released from Storytone was Who’s Gonna Stand Up? which was featured in four different arrangements upon the release. The orchestral version gave a glimpse into the rest of Storytone, and it was a tantalising glimpse at that. This pro-environment call to action ballad was enveloped by beautiful orchestral arrangements cascading around Young’s aging voice with the kind of effortless usually reserved for youthfulness. When I Watch You Sleeping followed, debuting with a musical video depicting Young with the orchestra. This track remains the most poignant on the album with Young’s gentle lyrics, echoing harmonica, and sweeping orchestra.

Neil Young’s return with this intriguing new record is at its strongest in the orchestral pieces. Aside from the two singles released before the record came out, Plastic Flowers and I’m Glad I Found You resonate strongly. The songs are hauntingly stunning as the Crazy Horse frontman reflects on many of his life’s pursuits, which usually surround women and cars. It feels retrospective and introspective at the same time with songs like I’m Glad I Found You explaining Young’s difficulty with people not understanding what it is like to be him. He insists in the song that he is not different from anybody else, and that he is glad he found the song’s subject because she does understand him.

Glimmer is a bit unusual, sounding strangely like a Disney ballad. It stretches Young’s voice a bit further than it should, and as a result, may be the weak point of the record. Regardless, the song is very pretty, and if it is indeed the weakest link, then the chain remains incredibly strong throughout. There are two songs marked as “band” songs on the record as well: I Want to Drive My Car and Like You Used to Do. Both songs are as tight as can be, featuring raspy vocals and a hard-jamming backing band. Both songs employ a brass section as well, and the sound is reminiscent of traditional New Orleans vibes.

Say Hello to Chicago is the only track marked as “big band” on the record, and there is a reason why. The legend’s homage to Chicago city and its blues tradition screams Chicago. It feels Sinatra-esque, with the big band collapsing the ceiling with sheer power. The big band influence is quickly mixed into Young’s rock years, though, and the electric guitar shines through frequently in a Chicago style.

Neil Young’s return to music after A Letter Home resulted in a very intriguing new record with Storytone. The deluxe version gives fans the set list twice over, with Young performing it solo on acoustic guitar and piano as well. These performances are worth the price of the version because they are so drastically different from the big band or orchestral sounds. They would even be worthy of a release by themselves without the theatrics of the orchestral version. In any case, Storytone will become a defining record of the rocker’s later years. The orchestra worked very well, and the intense cacophony of it builds around Young throughout the album rather than over him. As a result, every breath he breathes is noticeable, every harmonica swipe piercing. Storytone is something special.