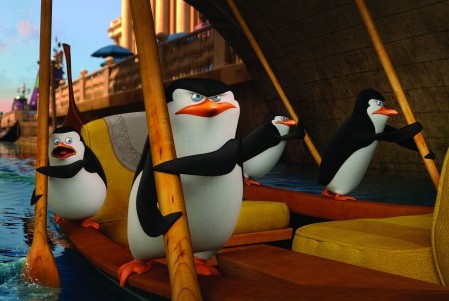 It is rare for any studio to get that perfect mix of adult and kiddie humor but Dreamworks has managed to come very close with Penguins of Madagascar which is comedic gold on the silver screen. Eric Darnell sits in the drivers seat in what is his fourth time directing a Madagascar feature and he is joined by Simon J. Smith (Bee Movie, Far Far Away Idol) in his first foray into this world. This first penguin sequel, which does not include any other characters from the franchise apart from peripherally, has the three actors who bring the four Arctic birds to life and some other very impressive names in supporting roles.

This film about the penguins from the Madagascar films begins with how the four became a team in the snow and ice and how they came to be in the New York City Zoo in the 2005 film Madagascar with Alex, Ben Stiller and Marty, Chris Rock and Melman, David Schwimmer and Gloria, Jada Pinkett Smith. In that first film, the penguins were seen to be experts at escaping. Skipper voiced by Tim McGrath was in charge of Kowalski, Rico and Private voiced by Chris Miller, Conrad Vernon and Christopher Knights respectively. In this film, the flightless birds are given more of a back story and once the meeting cute portion of the feature ends, the team of four escape from Madagascar and King Julien’s eternal parties.

On their travels the four meet up with Dave (John Malkovich), a figure from their past who has a bone to pick will all penguins. This supervillain, Dr. Octavius Brine, is determined to wipe cuteness off the face of the earth and only Skipper, his team and a heroic spy organization known as The North Wind stand in his way. The spies are headed up by a wolf known as “Classified” (Benedict Cumberbatch) who leads his own crack team which consists of a Polar Bear called Corporal (Peter Stormare) who is an enforcer, an Owl intelligence officer named Eve (Annet Mahendru) and their demolitions expert Short Fuse, a seal who is voiced by Ken Jeong.

These big names, specifically Stormare, Cumberbatch and Malkovich add a depth to this animated feature about fan favorites, the Penguins of Madagascar whose story has allowed Dreamworks to come up with more comedic gold. The jokes and gags come at a rapid machine gun pace. There are a plethora of puns, mainly in terms of names of things and people some fall flatter than others but that is okay, if one does not hit the funny bone just right, the joke right behind that one will. This blend of machine gun pace and shotgun delivery means that there are parts in the film that should please most of the audience.

There is at least one in-joke, the leader of The North Wind, Classified continually mispronounces penguin. Not overly so, but just enough to make it noticeable. Benedict Cumberbatch was on the Graham Norton talks show in the United Kingdom on BBC One. The host of the show was prompted, by viewers, to request that the award winning actor say penguin. Apparently, while narrating a 2009 wildlife program for the BBC and the Discovery Channel, titled Wild Pacific, the Khan actor mispronounced the word everything he had to mention the creatures. The inclusion, or just the idea of casting Cumberbatch, of the actor in this movie was a stroke of comedic genius and Dreamworks’ Penguins of Madagascar strikes gold by being just as funny over the entire length of the film. The film opens November 26 and parents should be advised the film is not for very small children. Older kids, ones who are not infants, will be just as engrossed and entertained as their parents.

One Response to "‘Penguins of Madagascar’ Dreamworks Comedic Gold (Review/Trailer)"