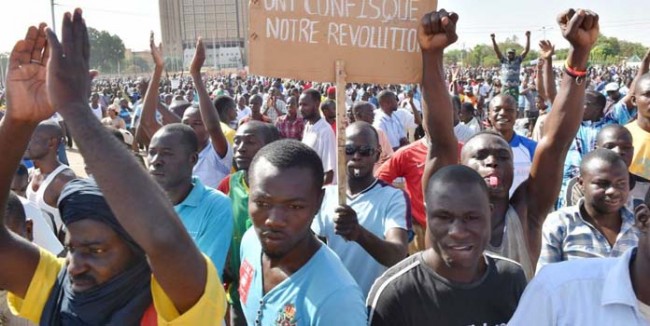 Protesters in the West African city of Burkina Faso have now been cleared out following a massive and violent protest that lead to changes for the country. After African President Blaise Compaore tried to extend his power beyond the 27 years already served, by making changes to the constitution, the protest broke out. The residents of the area surrounding Burkina Faso, gathered on the streets of Ouagadougou, the capital, in hopes of letting Compaore know that they did not want him to rule any longer. As if that opposition was not strong enough, matters suddenly got worse after they appointed an interim leader.

For many months protesters in Africa have worked to push out a military ruler, President Blaise Compaore, who seized power in 1987. After much protest, Compaore stepped down as President which would have ended the protest. However, Lieutenant Colonel Isaac Zida was then appointed interim president shortly after. This caused the protesters to become outraged as they stormed the parliament building before setting it on fire. Though three people were initially killed in the stampede of protesters heading for the parliament building, crowds continued to gather in a violent manner in front of the building. They voiced their concerns over the fact that Zida is deputy commander for the elite presidential guard, also a military man. According to sources, Zida appointed himself interim president, overruling General Honore Traore, a military chief who claimed to want a transitional government.

With much opposition to a military seized government, the United States condemned the Burkina Faso military seizure. They ordered the military to transfer power over to authorities of the civilian nature, threatening to freeze military cooperation from the U.S. if they believe that a military coup had taken place. Zida stated that the takeover was not a coup but rather an uprising. Though he pressed to try to allow the military rule, appealing to the African Union and ECOWAS, he was still ordered to transfer power to the civilian authority.

According to sources the protest had continued as the army suspended the constitution and dissolved legislation, which gave the residents of Burkina Faso the right to vote for a new president within 90 days of the former president’s resignation. The interim president is only suppose to be allowed to be appointed for 90 days, though he can often run in the election after. However, with the military takeover the election was not set to be held within 90 days, and since the army suspended the constitution it was unclear as to whether or not an election would take place at all.

Though the African Union stated that the issue of whether or not military rule would continue to be allowed, after they handed it over to the civilian authorities, would be further discussed on Monday by the Peace and Security Council. They are the group that handles democratic process, and they can also impose sanctions for violations of such process. With the United States and France watching over Burkina Faso, and with the recent ruling by the African Union, protesters gained more confidence, though the army was not backing down. Protesters were cleared as the army opened fire, killing one protester, as the army claimed that they did not want power but they did want the protest to stop. According to sources, General Honnore Traore seized power and had taken over, though he may not have the full backing of the military.

As the violence in Burkina Faso continues, it is unclear exactly how and when it will be resolved. With the battle for a leader the protests are becoming more violent. Until an election is allowed to the people to select their new president, protesters claim that they are not going to end the so-called anarchy. At the same time the military seems quite persistent in restoring order, no matter what actions they have to take.