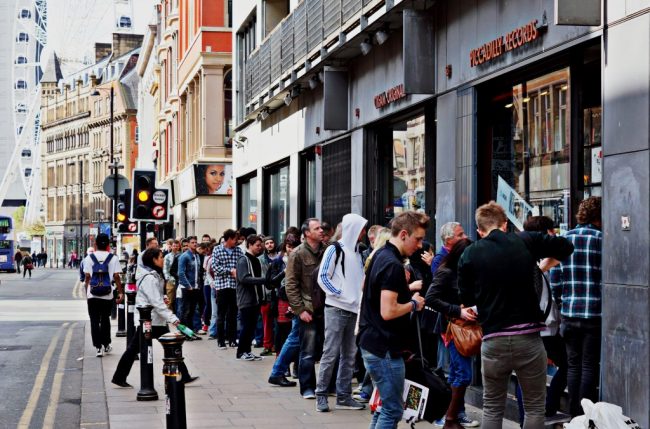 While the official Record Store Day is in April, some of the best vinyl catches of the year are on the second instance of the holiday on Black Friday. This year there were a number of releases, though only a few were notably worth braving the Black Friday rush to find. These are some of the best catches, which may still be available at select record shops over the next month and online.

Right out of the gate, the vinyl release of The Velvet Underground’s Live MCMXCIII was a must-have. The legendary 1993 reunion of the famed group was captured and released on cassette, CD, and DVD, but never received a proper analog vinyl outing. This record store day it was available with only 7,500 double record pressings hitting the market, pressed on dark blue vinyl to match the cover. Out of most of the Record Store Day outings this Black Friday, this was likely the granddaddy and certainly the most collectible. At the quantity it was pressed in, it’ll become a hot collector’s item quickly.

David Bowie released another notable record on Friday, his seven-inch for Sue (Or a Season in Crime.) This new jazz fusion rocker sparked off the beginning of his new collection, Nothing Has Changed, marking his first release since his Grammy nominated album, The Next Day. The real treasure here, however, is the B-side, a scratchy and fiery original titled Tis A Pity She’s a Whore. The awkward title is deceiving, and the track is very impressive and equally as experimental as Sue. In other seven-inch related news, Miles Davis’ camp dropped Blue Xmas, a delightful anti-commercialism track very worth having on vinyl this holiday season, and yes, it is on blue vinyl.

Another best catch from Record Store Day Black Friday was a reissue of Phil Spector’s A Christmas Gift For You, pressed on colored vinyl. This album revolutionized holiday music and created the definitive template for a good and rocking holiday record. Utilizing his “wall of sound” production methods and a cast of all-star performers from his early Philles Records label, Spector changed history. This diamond in the rough should be on all vinyl lovers radars in the coming weeks if they could not pick it up on Friday.

Without any Neil Young, there cannot be a celebration of analog sound quality. Fortunately, the legend delivered. Official Release Series 5-8 debuted on Record Store Day: a box that contained Time Fades Away, On the Beach, Zuma and Tonight’s the Night all pressed on 180g vinyl. On previous instances of the holiday the first few items of this series dropped and were quickly picked up. Considering how much love goes into a Neil Young archival project, this was one of the best catches of the day as well.

For fans that did not get a chance to get stuck in traffic on Record Store Day Black Friday, some of these best catches may still be available. Record shops have a tendency to get late shipments, and some shops have little luck selling some of their best offerings. Visiting record shops over the next week or hopping on eBay may prove fruitful for collectors seeking out these gems. If fans did miss out, though, there is always April and a time to do it all again.