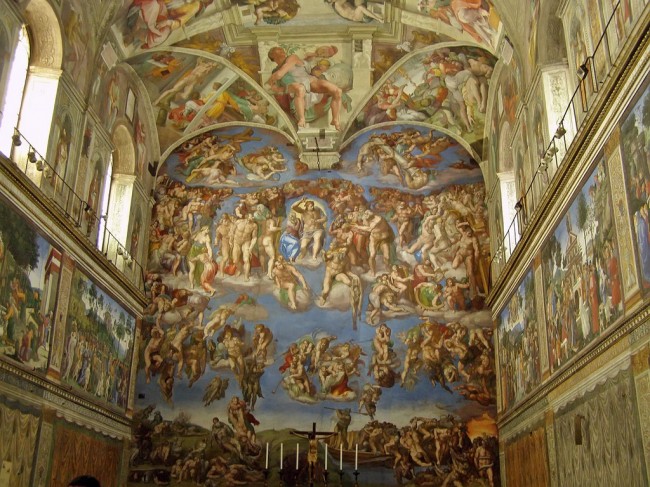 The Sistine Chapel has unveiled a technologically advanced LED lighting project as part of a conservation effort consisting of design intelligence. Over 500 years ago when the Sistine Chapel was first adorned with Michelangelo’s frescoes, the chapel did not yet, have the 600 million visitors per year it now hosts. According to the The Daily Beast, chapel visits are steadily increasing each year.

As humans visit the chapel, the exhalation of carbon dioxide from breathing, places the artwork at risk for deterioration. The answer to this problem is a high technology lighting and ventilation system. To provide precise details on the system’s sophistication and installation processes, a press conference was held, according to the Catholic News Agency. Reportedly, the way the lighting system works is through intelligence, meaning having the technological capability of sensing, measuring and adjusting the chapel’s oxygen levels.

The protection of the priceless masterpieces cannot be understated. Recently, according to Times Dispatch, it has been disclosed that the frescoes had sustained damage. Pockets of a white powdery substance, or calcium deposits, covered some of the artwork, only visible through inspection at a close range. This was able to be removed.

The efforts to assure preservation of the chapel’s masterpieces came at a cost of nearly $4 million dollars. As reported by The Daily Beast, the costs were completely covered through Led4Art consortium funding, as well as, through in-kind donations of technology skills and supplies.

To carry out the technological feat, the Sistine Chapel turned once again to the Carrier company, the same company that installed the chapel’s original air conditioning system. The Carrier company’s director, Michel Grabon remarked at the press conference, stating that the system focused on intelligence, efficient operation and design advancements as key to current and future artwork protection.

There are a number of tremendous benefits to be gained from the LED illumination project. With such a state-of-the-art system, the Sistine Chapel will incur less energy usage. This will naturally result in lowered energy bills formerly associated with usage of ultraviolet light bulbs. Additionally, under scrutiny, ultraviolet lightbulbs were found to be damaging to the artwork.

Chapel visitors will now find that, though the new LED lights are deliberately designed so they are imperceptible, the artwork itself has been illuminated with utmost precision. According to the Catholic News Agency, a battery of test were run on the colors within the frescoes to have a clear indication of each one’s reaction to the light. Reportedly, the hues within the artwork displayed its greatest appeal when the light bulb’s color temperature peaked at 3,550 Kelvin.

The final touches before the unveiling occurred when lighting engineers and art historians went to work side by side in the chapel’s interior. Together, they collaborated to appropriately showcase the illuminated artwork. As they adjusted the 7,000 lights, a desirable effect, ultimately resulted.

Since the Sistine Chapel has unveiled their newly illuminated interior, the lights are shining brightly with intelligent design on Michelangelo’s masterpieces.  This provides protection for the priceless frescoes and opportunity for tourists to enjoy the artwork in a whole new light.