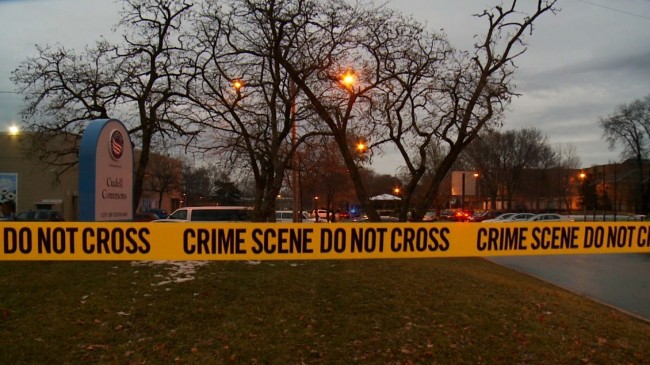 In another case of an unarmed person being shot by police, Tamir Rice, a 12-year-old boy, was allegedly shot and killed by a Cleveland police officer because he was waving a gun that turned out to be a toy. Tensions have been high in the wake of the Ferguson grand jury decision which caused protests across the nation.

Rice was said to have been carrying an airsoft pellet gun. Although it might look similar to a real gun, it had an orange tip to show it was not real.

The shooting took place on a playground near Cudell Recreation Center on Saturday afternoon. A 911 call suggests the caller thought the gun Rice had was fake, but was not sure. It is unclear if that information reached the police officer who responded to the call.

The events that led up to Rice being shot and killed are still under investigation, however, it was reported that the boy was allegedly waving his gun around at people. There was no other report of verbal threats or any other confrontation between the officer and Rice.

Rice was approached by an officer who saw the gun and told the boy to raise his hands. The officer was nearly 10 feet away when Rice reached for his gun. He was shot twice, with at least one of those shots hitting his stomach. It was not stated if the other bullet hit him.  He died early Sunday morning at MetroHealth Medical Center.

Cleveland police have not released the name of the officer who allegedly shot Rice, due to the nature of the criminal investigation. Currently, all that is known is that he is a first-year officer. He and his partner are now on administrative leave pending investigation.

The surveillance footage was scheduled to be released Wednesday at 1:00 p.m., and should give insight into the incident. It is a matter of public record, and therefore it will not be kept private due to the criminal investigation.

After the Ferguson grand jury released their decision, riots and protests have been popping up all over the country by people calling for justice. In Cleveland, the protests were not only about Michael Brown, but also about Rice, 12, who was allegedly shot and killed for waving a toy gun.

Similarities in the two incidents are at the heart of the protests. Michael Brown was young and black, as like Rice. Both boys allegedly died at the hands of a white police officer. Similarly, both boys hail from communities that have predominantly black residents and a white majority police force.

Protesters were peaceful in Cleveland, and police closed down intersections to accommodate the nearly 300 people who were present to march. Many protesters are blaming the police department for excessive force and question if they are trained to properly handle children or young adults. The police department’s response was to say that sometimes there is only a split second to respond to a potentially critical situation, and the officer acted accordingly.

Cleveland Police Chief Calvin Williams indicated that his department is having all officers outfitted with body cameras.  The purpose will be to better determine how critical a situation is for an officer. This change is expected to happen by the end of January.

The shooting and killing of 12-year-old Tamir Rice, allegedly because he was waving a toy gun, is truly a tragedy.  That incident has elicited a massive response from the community. Certainly his death will add to the already growing number of racially charged incidents.