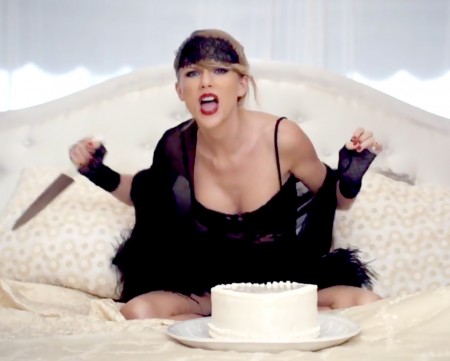 Taylor Swift released her Blank Space music video on Monday and it is quite simply crazed genius. Funny, tongue in cheek, outlandish, sly, and bloody brilliant. Even without watching the video just listening to the lyrics is enough to place this particular song as one of her cleverest and most entertaining of 2014. “I’m a nightmare dressed like a daydream; Screaming, crying, perfect storm.” Sounds like many an exe known by many a man.

Fans are saying that Taylor is using the media’s version of her love life as the template for this Fatal Attraction themed music video, and song, and all that is missing is the bunny boiling scene which may just have taken things that bit too far. Swift likes to have a laugh at the rumors about her love life, or lack thereof, but she has a refined humor. The 24 year old singer/songwriter and actress has a streak of humor in her the size of Texas and she is not afraid to use it.

The song, Blank Space is listed as being written by her, Shellback and Martin Max. Directed by Joseph Khan (Britney Spears’ fave music video director) the video is one step above brilliant genius and between editing and pacing, matches the lyrics perfectly. Taylor gets the joke and she wants her fans to as well. Because of her reputation as the gal who cannot keep a fella, she plays the “heroine” in the music video as a crazed lusting princess who has left the castle gates open so that just any old prince charming can come in. It does not matter to the poor little rich girl, as she says in the beginning, the romance will not last, it is never meant to.

The lyrics point out that from the very start, this is a game and it is one that she will win, regardless of the lyric which says she is “dying to see how this one ends.” Her character also mentions lies and the game, at least twice, and that is the biggest clue to her motivation here. When she says she loves the players, she means it literally, but only as long as it takes to build her conquest up so she can tear him down. Which was her intention all along, she even warns the guy that she is going to torture him because “Boys only want love if it’s torture.”

Taylor is one of the most brilliant young performers in the world of music today and her move into pop shows just how versatile this artist is willing to be. Her songs in the pop world have been full of clever humor and in this music video in particular stunning visuals combined with a great storyline make it a cut above the rest. The whole thing is built around the rumors about her real life relationships and Swift is telling her fans that it is all rubbish in the most amusing way possible.

Blank Space, besides being a brilliant song in its own right, has a music video that reeks of genius, blending humor and Taylor Swift’s response to critics of her “lovelife.” While her fictional character in the video is crying mascara-running tears whilst theatrically slicing and dicing clothes, paintings and a car, or “playing” with her latest paramour, Taylor is having a great time. Just as her counterpart is, even when going a little crazy. Swift is saying that all this is temporary and that regardless of the facts she is having as much fun as her fans. Catchy, clever, and a song that leaves you wanting to hear it again, Blank Space is a great follow up to Shake it Off.