‘The Walking Dead’ Daryl and Noah to the Rescue (Review) 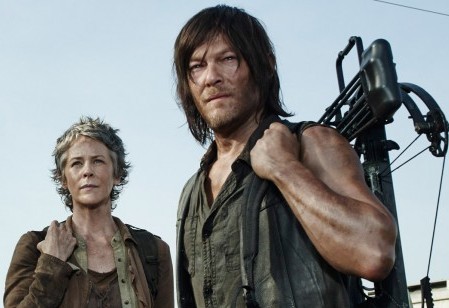 In this week’s episode of The Walking Dead: Consumed, Carol joined Daryl to go and find Beth, or at least learn what has happened to her, and by the end of the episode it looks like it will be Noah who walks out of the bushes when the show converges to the point where Michonne confronted Mr. Dixon in the bushes outside the cowardly Reverend Gabriel’s church. Taking a moment to look dispassionately at this season’s events and its trio of storylines, which are pretty much occurring at the same time in the verse at this point, are all putting the characters through the grinder. Rick’s group have been left pretty much alone while The Walking Dead has followed the journeys of Abraham’s group and Beth’s.

The last time Beth was seen, Carol was being wheeled into the hospital just as Daryl’s kidnapped friend looked like she was going to exact some bloody retribution. Now, the audience know that Ms. Peletier was not “playing possum,” to get into the hospital. Fans also have a pretty good idea of how they got Beth and how her wrist got fractured. Hitting Carol with a car also proves that the entire group under Officer Dawn are cowardly stinkers who take no chances when capturing more victims.

Consumed, this week’s episode of The Walking Dead, had a theme of fire as was pointed out so capably in The Talking Dead by the guests, but the title could also be dealing with what the main characters are “consumed” with in terms of memories. Carol specifically has things in her mind she has been dragging with her, even through her Rambo-like rescue effort at Terminus. That she is still thinking of the girls, Lizzie and Mika, from The Grove in season four is evident from the Tom Sawyer book Carol has in the show. Daryl has his own baggage, again evidenced by the book found in his backpack that deals with child abuse. Part of Dixon’s bonding with Beth had him admitting that both he and Merle had been physically abused as children. Noah, who was obviously planning on recusing Beth from the hospital was also consumed with his need to arm himself to fight not only the hospital staff but any walking dead between him and his new friend.

The show gave viewers a chance to see a little of what Carol went through before bumping into Tyrese, baby Judith and the girls. It is interesting to note that after a little reflection she came back to the prison. This beaten down woman at the beginning of The Walking Dead in season one, has grown so much as a character and become a very powerful female role model. Both she and Daryl have overcome adversity in their backgrounds to become more positive characters. Carol even tells her old friend that he has become a man in her absence.

By the end of The Walking Dead Carol has been knocked down and captured, Daryl and Noah are obviously going to get Rick and company to rescue both women from the evil hospital people and fans of the show now know that it was not Beth in that sheet, from last week’s sneak peak of the Consumed episode. With so few episodes left of the series until the mid-season break, it is a pretty good bet that Beth and Carol will be in the hospital for quite a bit longer. Perhaps long enough for Abraham and Eugene to “kiss and make up” if that is even possible.