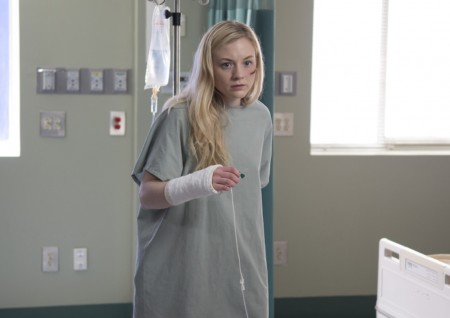 If ever there was an OMG moment in The Walking Dead this year, apart from the teaser at the beginning of season five at Terminus, it has to be the Talking Dead preview that aired on Sunday, November 9, was that Beth in the sheet? It has been pointed out by several folks, although first shout has got to goe to Talking Dead host Chris Hardwick. The presenter’s face surely must have mirrored that of every viewer who watched that clip. His expression was that of disbelieving shock and his statement that the sheet covered object was “Beth sized,” was what every fan was thinking.

What makes this so difficult is that Beth Greene is one of those “made for TV” characters in The Walking Dead verse. In a move that just smacks fans in the face with potential bitter irony, the Beth-sized bundle in the sheet is carried out by another character that does not exist in Robert Kirkman’s comic world either. Both Merle and Daryl Dixon were created for the AMC television show and none of the three exist except for this iteration of The Walking Dead.

Not that their existence would really make any difference in the overall scheme of things. As viewers who are fans of both worlds (comic and television) already know, what happens in one does not necessarily happen in the other. Deaths do not match, character arcs deviate and some things just do not occur in the TV world, entire lists, and debates, exist on the Internet about the differences between Kirkman’s original source material and the AMC adaptation that Robert has a say in. So the big question remains, is that Beth in the sheet in the Talking Dead preview of the Consumed episode of The Walking Dead?

It could very well be. In terms of characters developed for just the TV version of the show, thus far two of the four have been killed off. The other Dixon brother Merle, played with a delicious evil by Michael Rooker, got a chance to “sort of” redeem himself before dying. Bob, who has been referred to as the television version of Dale in the comics also just died after getting the chance to give the Terminus survivors the finger, or in Bob’s case his leg, before being dispatched.

That leaves Daryl and Beth. Scott Gimple and company have been teasingly dangling Beth’s possible demise since the end of season four. There were many who believed that the girl was going to wind up as a plate of barbecue at Terminus. While there were no cross bearing black cars at the cannibal base, there was still a chance that she could have been, if not on the blue plate special of the day, in one of those boxcars.

Turning up in the episode of The Walking Dead titled Slabtown Beth, finally, had an entire show based on her experiences. At the end of the episode, it looked like Hershel’s youngest was about to go on a scissor rampage and kill as many as possible in order to escape. As she approaches the room where Officer Dawn is, Carol is wheeled into the hospital and she stops cold. Beth does still have murder in her eye though, so does she only pause?

With the preview shown on Talking Dead of next week’s episode of The Walking Dead, it certainly seems like that could be Beth in that sheet. Why else would Carol and Daryl be so serious and full of gravitas? Where is Beth, the two are obviously outside a, if not the, hospital, and she is nowhere to be seen. Add to this disturbing scenario, one little fact: The characters who have had an entire episode dedicated to them have died. Remember the Governor? Merle? Just food for thought, but on the bright side, at least Ms. Green was not the dish of the day at Terminus, like “Beth in a blanket” or some other equally disturbing walking dead treat. Readers can see the preview below and see what they think, Beth or not-Beth.