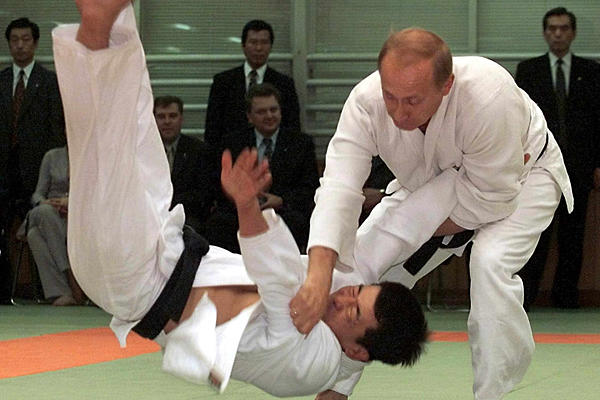 Russian and Soviet leaders have long been known as tough guys, standing up to the West, others in their party and other Eastern bloc nations. While many showed powerful military might, crackdowns on opposition, pounding shoes and such, but none have had the weapons at hand that current Russian President Vladimir Putin does – his high-ranking black belt-earning and judo-trained hands.

Putin just earned an eighth-degree black belt in karate. It joins his fifth-degree black belt in judo, which he earned in 2001, and ninth-dan ranking (the highest) in taekwondo, giving him honorary grandmaster status, achieved in 2013. Whether anyone agrees with his politics or position on Ukraine, the 62-year-old former KGB officer is one kick-ass leader.

Buff and muscle-bound today, Putin started his martial arts training at age 11 in St. Petersburg (which was then called Leningrad). He initially studied a local martial art called sambo before he took up judo. In interviews, he has explained that “judo teaches self-control, the ability to feel the moment, to see the opponent’s strengths and weaknesses,” clearly serving as training for his later career in the KGB and Russian politics.

Putin earned the Soviet and Russian Master of Sports title in sambo in 1973 and judo in 1975 He has even co-authored a book on the sport. During a Japanese trip, the Russian president visited the judo headquarters, the Kodokan Institute, and delighted students and Japanese official with a display of his techniques.

It is unclear when he started practicing other martial arts. The form of karate he practices is called Kyokushin, which is a full contact, intense form that was developed in Japan. He earned his seventh “dan” or black belt in the form of karate in 2009. The award of the eighth “dan” (there are 10 possible) was given earlier this year by the Kyokushin-Kan International Honbu, but just announced this week.

Putin clearly enjoys his tough guy image on the mat, in the Ukraine and on the world stage. He is often seen during outdoor activities and aggressively promoting a health way of life – which is quite the contrast compared to his immediate predecessor as President Boris Yeltsin, who was widely portrayed as a overweight alcoholic.

Like a Western celebrity or campaigning politician, Putin regularly poses for public relations pictures of his physique that emphasize his macho activities. He wants to be seen as a real life super man. How many men in their late 50s would pose bare chested to flaunt his muscles? His PR photo-ops have included shots of the martial arts activities, as well as riding horses, alpine skiing, shooting tigers with a tranquilizer gun, swimming in a freezing Siberian river, shooting a cross bow and scuba diving. He has flown military jets, dumped water on a raging fire while piloting a firefighting plane, hang glided, rode motorbikes and driven a race car.

Besides trying to be a blend of Jackie Chan, Ironman and James Bond, the Russian President also has a soft side. He paints (art not walls) and has sung in public, including a solo performance of Blueberry Hill at a 2010 concert attended by a star-studded crowd of European and American celebrities.

Western leaders who have tried to control their image have not been as successful at cultivating a “strong” image as an icon. Whether one agrees with his actions at this time as a world leader, it is clear Vladimir Putin has some powerful weapons in his hands and his PR powers.