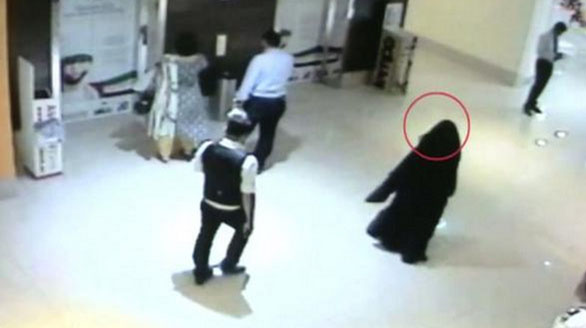 During her visit to a mall in an upscale area of Abu Dhabi, an American teacher was fatally stabbed by a culprit wearing a full black burqua. Covering the assailant from head to toe, the veil was able to obscure the suspects identity as he/she walked into the mall and waited for over one hour before stabbing the teacher, who has now been identified as Ibolya Ryan, and leaving her there to bleed out and die. According to sources the American teacher was stabbed six times before the suspect made a quick exit out of the mall.

At the end of October the U.S. embassy warned, on their website, of possible attacks against teachers and students from America and other Western and Middle East schools. They warned that it was possible that a Jihadist threat could make teachers and students a target, though high concentration areas possibly pointed out two specific locations, Maadi in Egypt and Jeddah in Saudi Arabia. Though threats against schools had been made before on several occasions, the embassy warned Americans to be on guard if in Egypt or other foreign countries.

The fatal stabbing of the American teacher, Ibolya Ryan, is believed to be tied to that threat even though events leading up to the stabbing at the mall in Abu Dhabi show an altercation before the murder. Though the motive is not completely clear, investigators are certain that the attack was planned, as the suspect had waited around the same area in the mall for over one hour before killing Ryan.

Ibolya Ryan was an American teacher who taught kindergarten. Originally from Romania where she was born, she was later trained to be a teacher in the U.S. After the victim was confirmed to be Ryan, her former husband picked up their two sons, 11-year-old twins, and left with them safely. According to sources, Ryan was currently staying in Abu Dhabi of the United Arab Emirates (UAE), after being assigned their in September of 2013, by the Canadian-based Footprints Recruiting. The CEO of that company, Ben Glickman, was the man who confirmed to news sources that the victim was Ryan.

Though police have no new information on the assailant since the attack occurred on Dec. 1, they have received more information on several other parts of the case, including the positive I.D. of the victim, video footage from mall, and confiscation of the weapon that was used.

In the past the UAE has always considered itself safe from the violence in the Middle East, but the fatal stabbing of the American teacher in Abu Dhabi has caused them to rethink their position and up their security measures. According to sources, they are working with the U.S. to determine ways to keep Americans safe from threats. The two countries’ authorities are also working together to solve the mystery of the assailant who has now been given the name the “Reem Island Ghost.”

After the American teacher was stabbed she was immediately taken to a medical center, Sheikh Khalifa Medical City, however the injuries that she suffered caught up with her, as she was then pronounced dead. The video from the mall surveillance shows that several people tried to stop the criminal in black, before he/she was able to escape on an elevator and leave the mall. Police are still working hard on the investigation in order to provide the deceased Ibolya Ryan and her family with justice.